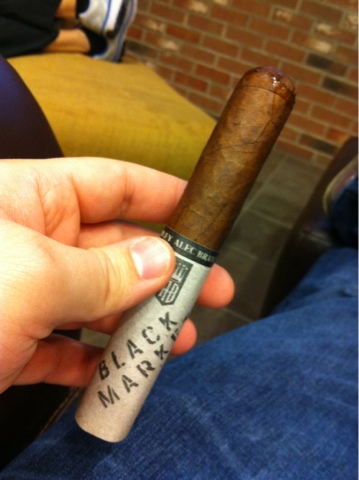 Appearance (0-20):
Lyricsninja: With a cigar that looks like this, it almost feels like it should be illegal to have it. The first thing that jumps out about this gordo is its massive 6”x60 size. This thing is legit. Its got a solid looking wrapper with an outstanding oily dark coloring. Unfortunately there are quite a few smaller veins throughout. The band structure is an interesting one with the huge band that when pulled off reveals that there is a second smaller band partially hidden below it. Tricky tricky Mr. Baldwin. A few points docked for the combination of the slightly overboard wrapper and abundance of smaller veins.  Score: 16/20

Kollarism: This is one big stick, measuring in at 6x60.  This size is fairly common now, especially with Gurkha.  The beautiful dark maduro wrapper gleams in the lights, and is oily to the touch.  There are two bands on this particular stick; one small band donning the Alec Bradley name, and another large 2” paper wrapper with some additional branding and Black Market name.  There was a MONSTER vein running almost the full length of the cigar that had me worried. Score: 17/20

Construction (0-20):
Lyricsninja: Right off the bat you can feel it is a firm cigar, no doubt about that. From end to end, there are no issues with the way it feels. The wrapper is well done and stays perfectly fine upon cutting. Further, there was minimal in terms of what was cut. This one burned almost completely evenly for me. I was pretty damn impressed. Score: 19/20

Kollarism: For a 6x60, this thing is loaded.  From my experience with 6x60 smokes, the tobacco really loosens up once you begin to smoke it.  This stayed very well packed, and still had a nice easy draw with large amounts of thick smoke.  The large vein actually played no role in the smoke, and the turn was perfect the whole way down.  After ashing at about 1.25”, the warm tobacco remaining formed a nice cone shape.  The cone shape is generally a good sign, as the ligero tobacco in the center of the cigar is burning the warmest. Score: 19/20

Strength (0-20):
Lyricsninja: Typically with a wrapper from you’ll find things that have some real power behind them. That wasn’t quite true here. While the flavors were full, the actual strength of the cigar was barely touching the medium to full range. I would put it slightly above medium, but barely so. Although I expected more… the medium profile works for this particular blend. Score: 18/20

Kollarism: I’d say this is a solid medium, as there wasn’t any overbearing heft to it.  With that being said, it was quite flavorful and enjoyable throughout.  I would be wary to smoke a super full 6x60 cigar….I would probably be lying on the floor.  I’m also curious if the small sizes of the Black Market have any extra kick to them? Score: 18/20

Flavor (0-20):
Lyricsninja: So the Black Market got me. I give in. From the first inch in I could taste something of a bitter coffee. But the entire time there was also something of a spicy wood taste to counterbalance it. Mixed in was some sort of natural cocoa sweetness. It was nearly bewildering… but you can absolutely find earthy tones that seem to bridge the chasm between the bitter, sweet, and spicy notes. It’s like the cigar shows you an odd combination and then solves it for you. Score: 19/20

Kollarism: I really got strong notes of cedar and earthiness.  There were some small hints of chocolate that came out in certain stages, but the smell of chocolate was more prevalent before I lit the cigar.  From time to time you will also find notes of sweetness or fruitness on your tongue.  I wouldn’t say this is an overly complex stick, but the flavors that were present were great. Score: 19/20

Value (0-20):
Lyricsninja: A $9.00 gordo like this is absolutely worth the price. It is on the higher end of my personal normal price scale (I tend to stay around the $6 range if possible) but I was glad to hop out of my comfort zone for this one. Score: 18/20

Kollarism: As mentioned earlier, this is a big smoke and the price point is probably spot on.  The Black Market really packs in a ton of tobacco, and it lasted me close to 2 hours of smoke time.  I wouldn’t hesitate to pick up another one and enjoy it again. Score: 18/20

Overall (0-100):
Lyricsninja: The Black Market is simply impressive. This one was imposing, complex, and generally an all around good cigar. To be absolutely honest, I prefer this one over the Prensado (which had been rated the cigar of the year). Pick one of these up, it’s absolutely worth your time and money! Score: 90/100

Kollarism: Alec Bradley really has made a name for himself most recently.  His Prensado just became Cigar of the Year, and the Tempus is a very strong stick as well.  The Maxx product line is another fabulous product that sports some large ring gauges and fuller strength.  For this stick in particular, I think it was another job well done.  Very consistent from start to finish, and it really just adds to an impressive resume.  Score: 91/100