I have heard some chatter about Cigar Fest and how Cigars International is making big bank on it. There seems to be a common opinion that they are just raking in the money through both the auctions for the early session as well as having expanded the festival to two days instead of one. A few thousand tickets each day at $100+ a piece… plus sales at the event… plus… yeah, you get the picture as to how that can add up rather quickly. And yet, if you think Cigars International is making a lot of money on this, you couldn’t be more wrong.

One of the major things that doesn’t get a lot of publicity is that the money generated from Cigar Fest goes to charity. That’s right – ticket sales, any sales the day of the event, and even the raffles are all done in the name of charity. That’s thousands of dollars that are being taken in that immediately gets turned around and put to a good cause. In fact, going a step further, throwing this event actually costs Cigars International money. They take care of ticket administration, have to supply the people to be able to run the event, set up the convention center the way it needs to be, etc. That’s a lot of man hours that they are paying for from their own pockets.

So why even throw the event if it’s going to end up costing you money? There are some simple logical conclusions you can draw here.

Taking aside the corporate reasoning, there is one other major reason - it’s a thank you to the many customers of Cigars International. It’s their way of passing on the goodness. Honestly speaking, where can you get 60+ cigars, an ash tray, humidor, cutter, posters, liquor, beer, BBQ lunch, etc while being able to meet some of the guys who put together your favorite blends for $150 or less? Nowhere. It really is a treat to be able to attend. If you ever get the chance to attend – do it. You will get tons of awesome swag while helping to give money to charity.

FYI – I am in no way affiliated with Cigars International, it’s simply my B&M. 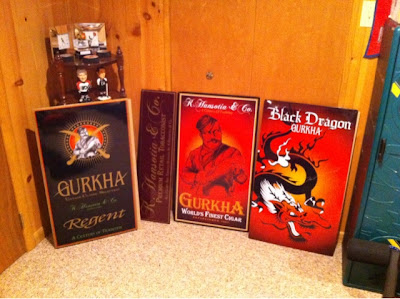 A quick edit for you - it was asked what charity CI donates to. In the past few years they have been donating to LifePath - http://www.lifepath.org/aboutus.html. The charity is located in the Lehigh Valley and was set up for helping those with special needs.﻿
Posted by Unknown at 11:16 AM

Email ThisBlogThis!Share to TwitterShare to FacebookShare to Pinterest
Labels: General