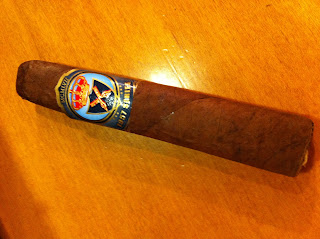 Information:
Country:
Wrapper origin:
Wrapper type: Maduro
Filler: Dominican
Length: 6”
Ring: 52
Cost: $4.00
Appearance (0-20): A nice rich and oily wrapper dresses this cigar up pretty well, supplementing the perfect box pressed nature. There’s a major vein that can be seen but the rest are simply small runs along it. The label speaks to Felipe Gregorio’s normal look, and it’s simplistic while being vibrant enough to catch the eye.
Score: 16
Construction (0-20): The 1957 Series felt great when it came to the distribution of tobacco, and smoking it proved that. The ash held on perfectly for almost 2 inches at a time and stayed nearly even throughout. The draw was absolutely prefect.
Score: 18
Strength (0-20): I would have to categorize this as being on the verge of being a full bodied cigar. It literally flirts with pushing over the verge into a full bodied frenzy, but sticks at the high end of the medium scale. It won’t kick your ass, but in the same its got enough power to really make you shake your head.
Score: 17
Flavor (0-20): Complexity may not be an absolute king on this; however it is loaded with a lot of enjoyable flavors. Coffee is likely the most striking, followed by very earthy / leathery touches. On the back end of things is some pepper that honestly sneaks up on you. There isn’t any real variance from these three major strokes, but each meld almost perfectly together.
Score: 17
Value (0-20): I have seen the price on these be as low as $4 and as high as $10. At a $4 price, it’s absolutely a spectacular value. However if you find yourself paying in upwards of $7.50, I would say it would be a little too pricey.
Score: 16
Additional Notes: Paired with Captain Morgan’s Private Stock at Cigars International.
Overall (0-100): If you can snag one of these for the right price, it’s absolutely worth it. There are some great flavors that come out of this and honestly, I would pick another up just to be able to enjoy them again. Construction is very good, even if the appearance isn’t perfect.
Score: 84
Posted by Unknown at 9:42 PM