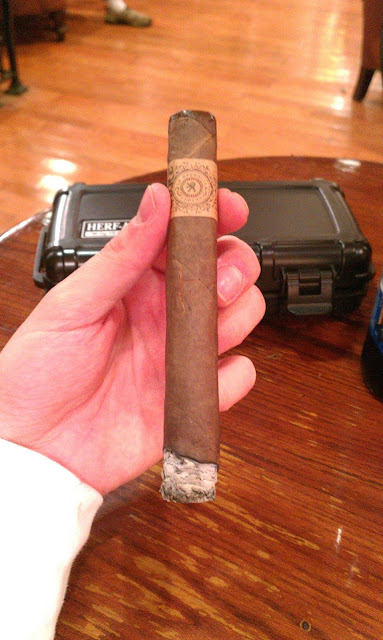 Appearance (0-20): The box press and wrap was completed nicely.  The band was simple and somewhat blends into the color of the wrapper, but that’s not a bad thing either. One small vein down the end of the cigar to note, but I can’t say that it affected anything about the smoke. There was a small crack in the middle of my cigar, but that has nothing to do with the construction. I think my humidor was off a bit. Beautiful.

Construction (0-20): Is AJ Fernandez a wizard? This guy doesn’t do anything but make amazing cigars.  This might be the best draw that I’ve ever had on a cigar; that I can easily remember that it.  One draw and I got great amounts of smoke. I usually pull twice on a cigar to get the right amount of smoke, but not here.  The burn was great, and ash was white-grey. The only complaint would be that the ash only held on for about ¾”.  If that is the only gripe that I have about the construction, then this is a win. The box press was done perfectly, with no soft spots at all.

Strength (0-20): The smoke was medium bodied, but the flavoring was quite balanced. Now AJ Fernandez can give you a wide array of strengths, and this was just right for this particular cigar.  I was not overpowered, but it allowed me to taste all the intricacies that were included in the filler. Great relaxing cigar.

Flavor (0-20): And here we are at the meat and potatoes.  Coming off the initial light, there is a quick bit of spice, and then right into cocoa flavor.  There is no time wasted here getting to what the cigar is all about.  You will taste cocoa/chocolate all the way through, but different notes of cedar, spice, and nuts will leave your pallet happy. After each puff, you will also taste sweetness on your tongue.

Value (0-20): I didn’t purchase this at retail, but it sells for $11.00. I guess that isn’t a terrible price point for the 6.5x52 box press.  Would I spring up and go buy it at retail? Maybe. Would I buy a sampler with this included to bring the MSRP down….Hell yea. I do believe that it is also priced higher since it used well aged tobaccos that require no rest in your humidor.

Overall (0-100): Just to remind everyone, I do not have stock in AJ Fernandez cigars. When you have it, you have it. He puts out great cigars, and they are consistent every single time.  I really enjoyed this, and would buy it again if the price is right. I wish he produced newer lines of cigars more often, but then again he takes his time and really hits a home run.

Posted by Kollarism at 8:37 AM