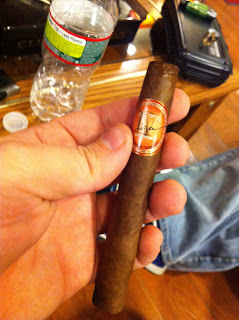 Information:
Country:
Wrapper origin:
Wrapper type:
Filler: unknown
Length: 5.5”
Ring: 43
Cost: $1.00
Appearance (0-20): Light wrapper with one too many veins for my liking. A couple of major veins dominate the length of the cigar with a few smaller ones stretched throughout. The wrapper is completely unimpressive, and the band is also somewhat normal. From first look, its one I would typically pass up.
Score: 6
Construction (0-20): For being such a small and compact cigar, you would think it would be perfectly packed. And if you put money on that fact, you would actually be right. This one was tightly packed, but unfortunately it was overpacked. The draw was way too tight through the entire smoke.
Score: 6
Strength (0-20): I expected this to be light, and this would be the area that meets my expectations in full. Absolutely a mild cigar that would suffice as something you can pass on to someone who had never had a cigar in their life and they would be fine after it.
Score: 12
Flavor (0-20): Woof. The only flavor that is distinguishable at all is a bit of cream. Aside from that it’s got a slight nutty sense to it, but otherwise it’s a ball of nothingness. No complexity, no real changes in flavor profile… yeah. It’s just completely one dimensional and boring.
Score: 5
Value (0-20): For a buck, I guess it isn’t awful. But on the same token you wouldn’t be able to convince me that a Diesel Unlimited is worth 4 of these… or 10… or 20.
Score: 4
Additional Notes: Paired with water.
Overall (0-100): I sincerely cannot fathom someone giving this a good rating. Its poor quality, bland tasting, and honestly not something I would choose to smoke. Hell, I don’t even think I would give these a second try. I’ll even go one step further and say I wouldn’t take one of these if it was given to me for free.
Score: 33
Posted by Unknown at 9:40 PM

Email ThisBlogThis!Share to TwitterShare to FacebookShare to Pinterest
Labels: 59 or below, Liga