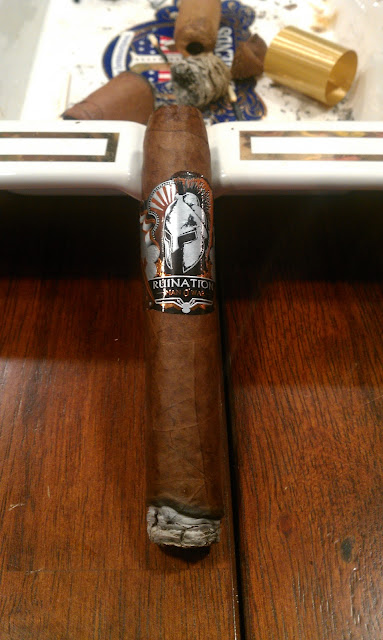 Appearance (0-20): As usual for an AJ Fernandez cigar, it looks like a premium cigar.  The medium brown wrapper is rolled well, and his one smaller vein.  The thing that really jumps out is the amazing cigar band.  The Spartan helmet is the centerpiece of the band, with many other intricacies all around it.  There are a multitude of colors that are involved which gleam in the lighting of CI.

Construction (0-20): This was probably the best draw that I’ve ever had on a cigar.  It was super tightly packed, but it drew so easily.  The best part about the draw was that the cigar did not burn quickly at all.  It absolutely billowed smoke from just one quick pull.  After about an inch, it started to burn a little bit uneven, but then it very quickly fixed itself.  That is another good sign of a premium cigar.  The ash held on over 2 inches, and fell on the table as I tried to get it to hold on longer.

Strength (0-20): I have smoked many of these sticks since they were released.  The first crop was an absolute ass-kicker.  You would really feel like you smoke a full cigar, and just finished a boxing match.  This newer crop seems to be not as full as it used to be.  I would rate it in the medium-full range, and still gives you a decent feeling.

Flavor (0-20): There are many different notes that come through the smoke here.  There is a lot of spice, but it is greatly balanced with notes of sweetness.  You’ll find strong notes of cedar or oak, with hints of earthiness and nuts.  From start to finish they will transition back and forth, which leaves you with a quite enjoyable experience.

Value (0-20): Coming in at around $11, I would say that it is aptly priced.  If this was the old crop of cigar, and I run to your B&M store and buy 10 boxes.  Unfortunately, the crop has changed a bit and they aren’t as strong anymore.  With that being said, it was very well packed and had tons of flavors.
Score: 17

Overall (0-100): As usual, I haven’t found an AJ cigar that I didn’t enjoy.  It holds it own in the market, and I always look at CI to find out if he has released anything new.  I don’t even question what it is, because I know I will love it.  As for the cigar, there are many complexities in the flavor department that will leave you pleased.  Look for them in sampler packs to drive the price down, and you will be a happy customer.

Posted by Kollarism at 6:33 AM