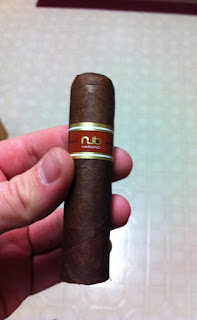 Appearance (0-20): This small, plump little wonder has a spectacular wrapper on it. It’s dark and oily and overall looks inviting. There are very few veins on the outside of this one, but the few that are there are hardly noticeable. The design of the band is simple and is in no way overwhelming.
Score: 19

Construction (0-20): Packed almost perfectly, the Nub Habano feels great. The initial cut left me with only a small amount of tobacco residue, which is always good. Throughout the smoke the cigar burned completely evenly, with the ash holding on through almost the entire thing. Very well done.
Score: 19

Strength (0-20): Medium to full. When I began I got the distinct feeling that this Nub was going to be medium, but it slowly bumped up as I moved along. I felt like it was a slide that began at the bottom in the medium range and as it was traversed and climbed I was able to hit something close to being full.
Score: 17

Flavor (0-20): Hmm. When I began all I could really taste was something of toast and earth with faint hints of wood. The flavors stayed as a base as the Nub continued, but added some sweetness… almost a malty flavor. The malty flavor continued to build when moving into the last bits of the cigar, finally finishing off with something of a spiced coffee taste. This had great complexity for such a short cigar, although it didn’t blend in completely seamlessly.
Score: 17

Value (0-20): If this was marked at $3.50, I would consider it to be a steal of a deal. Unfortunately I am not much of a fan of smaller cigars. As such, I would see this as adequately priced for what it is.
Score: 16

Additional Notes: Paired with coffee at on my deck.

Overall (0-100): The 4”x60 is not typically something I would gravitate toward as I’m not a fan of smaller cigars. However, this one in particular was intriguing to me due to a great looking wrapper. Unfortunately I personally found the taste of it to be slightly muddled and the price to be a little high. The complexity of taste does, however, work in its favor. I would absolutely be willing to pick up another one of these.
Score: 88
Posted by Unknown at 12:23 PM

Email ThisBlogThis!Share to TwitterShare to FacebookShare to Pinterest
Labels: 80-89, Nub