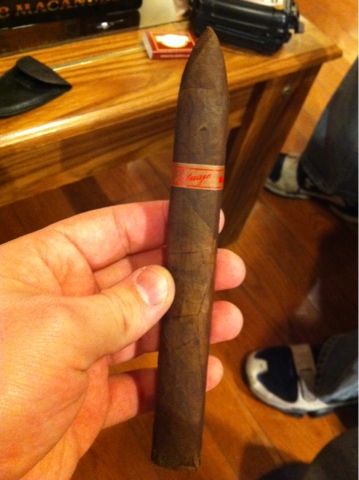 Information:
Country: Nicaragua
Wrapper origin: Ecuador
Wrapper type: Sumatra
Filler: Nicaraguan
Length: 7.5”
Ring: 52
Cost: $13.00
Appearance (0-20):
Lyricsninja: I was pretty excited when taking a look at this one. The Wolfman has a rugged looking Ecuadorian Sumatra wrapper that nearly screams “I’m wild, don’t mess with me” (And not in the semi lame teen wolf sort of way). It’s a really nice size that’s capped off by a shaggy foot. Get it? Wolfman? Shaggy foot? Very few noticeable veins. Overall, I’m impressed by the presentation. Even the label itself feels earthy and dirty. Score: 20/20
Kollarism: This was my first cigar from the Tatuaje Monster series. The cigar looks beautiful, in an ugly way. The Wolfman has a rugged look to it with the shaggy foot at the end, and a very simple band---just how Tatuaje generally places their bands. The medium brown band had a soft sheen to it, but definitely not oily. The smell was amazing. Lets light this up. Score: 19/20

Construction (0-20):
Lyricsninja: Nothing seemed amiss at all when lighting this one up. Everything felt very well packed and the draw was just perfect. Unfortunately this turned into a monster on me during the smoke (see what I did there?). About an inch and a half in, the burn was so uneven that I had to touch it up. It continued to burn uneven for about two more inches before it finally straightened itself out. After that point I had no complaints. Score: 15/20
Kollarism: This 7.5” smoke was big…I don’t think that even counted the shaggy foot. The craftsmanship in the roll was beautiful, and the wrapper contained very small veins. I must say, the draw was very nice, but almost a bit loose. I only had to draw once for a 8” cigar, and received puffs of smoke. This caused it to burn somewhat quickly. After about 2 inches, the burn was uneven and I had to make a few touch-ups. Score: 17/20

Strength (0-20):
Lyricsninja: Much like a wolfman would be in real life, he is pretty strong when paired up against a mere mortal. It’s the type of cigar that will put hair on your chest. Its full bodied, and definitely just a tad under full strength. Score: 18/20
Kollarism: As I started smoking this cigar, it tasted like there was good flavor and not too much heft. I turned to my brother and said this is a nice solid medium. After about 1 ½”, I got slapped in the face. Either the nicotine hit me, or it moved right up to full strength pretty quick. Overall, I’d say it’s a med-full cigar, and Tatuaje did a nice job with its strength profile. Quite enjoyable. Score: 18/20

Flavor (0-20):
Lyricsninja: So here is where I was a little surprised. This didn’t, and I repeat didn’t taste like a hairy sweaty armpit. In fact, its very far from that. Tatuaje does a great job of bringing out some wonderful cocoa notes along with some other kind of sweetness that I couldn’t define. Perhaps something of a citrus note? Hmm. I’ll need to smoke another to be sure. On that same background of taste is a woody note that builds throughout the cigar, eventually overshadowing the sweetness. However by the last third the main taste of wood is smacked with heavy spice. It was a really enjoyable ride from sweet child to bitter angry wolfman. Score: 19/20
Kollarism: The flavors weren’t overly complex, but they were strong. Upon lighting, a quick bit of spice and sweetness. The main notes were somewhere along the lines of a cocoa, with small hints of wood (cedar?). The strong flavor mellows out after the first third, and the Wolfman mellows out the next third. The final third will give you similar flavors, but ramp back into a bit more spice. One additional note is that smokes went easy through the nose. Similar to the La Herencia Core, the smooth flavors allowed you to taste them by passing them through your nose easily as well. Score: 18/20

Value (0-20):
Lyricsninja: It’s a pricey cigar, but there are absolutely some mitigating factors to consider. Make sure to read my additional notes before thinking I’m crazy for giving such a high rating to a $13 cigar. Score: 18/20
Kollarism: Generally I would say $13 is a higher end price for a cigar. Given that is a very limited release, they probably got it about right. If you have the opportunity to get this cigar for the correct MSRP, I would definitely try it. Some people will try to buy all the stock, and play the Supply & Demand game with you by raising the retail. Jerks. Score: 17/20

Additional Notes:
Lyricsninja: It would be remiss to not mention something special about this cigar. With under 25000 total produced, it begins with a smaller subset than a lot of the normal runs. I had the pleasure of being able to see some of the “special” boxes, which is a ragged looking casket with blood drops all over it. Couple it with the fact that the specialized boxes contained 13 cigars (unlucky number), were only sent to 13 (unlucky) stores and that only 666 (the devil!) of these particular boxes exist… yeah. It adds to the whole mystique.
Kollarism: Smoked at CI, paired with blue Gatorade. Smoked alongside my brother. Thanks for DarkmanXJ for the opportunity for us to try these.

Overall (0-100):
Lyricsninja: Limited quantities and special marketing give this particular stogie its own little bit of flair. But that helps to build the allure with the Wolfman, which behind all the marketing – is a damn good cigar. While a little pricey, its worth trying at least once. Just try not to get bitten by the Wolfman’s bite or you may find yourself passed out in your local tobacco shop with empty pockets! Score: 90/100
Kollarism: For the first Monster series cigar and all of the anticipation that I had before smoking this, I was pleased. I have heard that this wasn’t the best of the series, so I look forward to trying the others at some point. Regardless, everything was enjoyable about this cigar except some small constructions issues. Other than that, I would recommend everyone to try at least one. As mentioned prior, the price is suitable for the short supply of these sticks. Smoke on my friends! Score: 89/100

Email ThisBlogThis!Share to TwitterShare to FacebookShare to Pinterest
Labels: 90+, Tatuaje