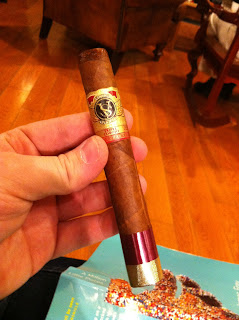 Information:
Country:
Wrapper origin:
Wrapper type: Corojo
Filler / Binder: Dominican and Nicaraguan
Length: 5.5”
Ring: 50
Cost: $3.00
Appearance (0-20): The most striking part of the appearance on this cigar might be the banding. Victor Sinclair thrives on uniformity and this is no exception to that rule. His standard VS band is on the top with a royal purple material band on the foot. The corojo wrapper is very inviting, although unfortunately its partially sullied by a rather large vein that is predominant on the one side.
Score: 16
Construction (0-20): When picking this up, I could feel that is was well packed. Feeling all throughout the stick revealed much of the same. There was only a small amount of debris along the cut… however the wrap job was a little unwieldy. Right along the top it began to unwind. That didn’t bode well for the rest of the smoke. The redeeming quality of the triple corojo was that it burned really well in spite of the issue of the vein and the unwrapping.
Score: 15
Strength (0-20): With this cigar having three times the corojo I really expected that it was going to be an overly heavy smoke. However, it ended up being more in the medium to full range with slight fluctuations. The strength really was right on to keep you smoking without cringing from something overly powerful.
Score: 18
Flavor (0-20): I was a little surprised to find this one beginning with a very creamy flavor. When exhaled through the nose you could easily taste a peppery kick. It really held its own, moving to a very earthy taste without losing its pepper flavors. There were some other minor flavors that popped up randomly that had me questioning what I was tasting – some sort of hearty fruit, oak, and other spices. But no matter the mixture, it was a really enjoyable flavor.
Score: 18
Value (0-20): For a $3.00 cigar, this is a value packed cigar. It is absolutely one that I would keep around for a second cigar of the night.
Score: 18
Additional Notes: Paired with coffee at Cigars International. Aged in my humidor for over 4 years.
Overall (0-100): While this particular triple corojo had a few shortcomings, it was a wildly successful smoke for the price. I would go as far as to say it exceeded my original expectations. It’s smooth and creamy with a nice spicy punch in the nose that lasts throughout. If you are looking for a solid cigar for a very reasonable price – look no further – this one will fit the bill. Just a special note on this one: I think the aging process really treated this particular cigar well.
Score: 85
Posted by Unknown at 8:03 PM