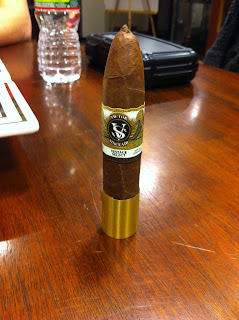 Appearance (0-20): The Vintage Select, by Victor Sinclair, looks inviting. It’s got the normal Victor Sinclair branding, right down to the matching footband, with the color denoting the type of cigar. There really is nothing flashy about this cigar at all. As can be seen in the picture, there are some major veins that seem to take over the wrapper, which doesn’t bode well for the VS. The wrapper itself looks rich but its one of the lighter maduro wrappers I have seen.
Score: 13

Construction (0-20): The wrap job on this one could show some improvement as it seems a little sloppy. The saving grace would be that the cigar is well filled and it leaves minimal debris upon cutting. The draw is nearly perfect, and continued to be that way throughout. When smoking this I was reminded of Nubs, although it didn’t stand up to a Nub-stand test. Regardless the ash held on very well and despite the veins, it burned pretty close to evenly.
Score: 16

Strength (0-20): The maduro nature would make me think it might be heavier, but I also know Victor Sinclair cigars… meaning they typically aren’t heavy at all. So the expectation was actually something of a medium bodied cigar. Unfortunately this one fell a bit short, possibly touching on medium bodied for a little bit during the cigar but typically staying toward the light end of things.
Score: 13

Flavor (0-20): I will be straight out honest here – it’s utterly one dimensional. When smoking this I was reminded of roasted nuts. That’s it. It’s creamy and smooth, while being consistent to a fault. No complexity here, but also it’s not a bad taste to it. Just… roasted nuts.
Score: 12

Overall (0-100): The moral of the story here is that a cheap cigar doesn’t mean it’s automatically value packed. The construction was decent on this stick. However, strength, flavor, and even appearance are mediocre at best. Still – if you are into light smokes that taste like roasted nuts, this one might be for you. But that’s one hell of a small niche market to be hitting.
Score: 62