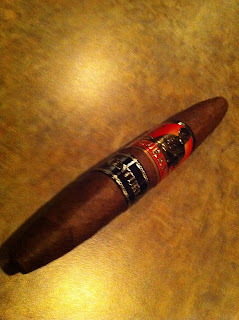 Information:
Country:
Wrapper origin:
Wrapper type: Broadleaf
Filler / Binder:
Length: 6”
Ring: 60
Cost: $30.00 (MSRP)
Appearance (0-20): The perfecto reviewed today, the Gurkha Centurian, has a nice look to it. Close to perfect little curves accentuate the normal Gurkha branding on the bands. The wrapper is a rich looking broadleaf that is extremely inviting. Minor veins are along the outside, but hopefully it will be nothing that changes the smoking experience.
Score: 17
Construction (0-20): Perfectos are one of the cigars I worry about the most. They are hard to pack properly and often will burn unevenly. This particular stick is no exception to the rule. The packing feels alright in the middle but as it stretches to each end there are some gaps. The cut reveals little tobacco residue, so there is some hope that this one will be good. The draw seems a tad trickier than it should be - at first it’s tough and all I can do is sit back and pray that it will open up as it burns…. And thankfully it does. As the cigar is smokes it becomes easier and easier to draw, but the ash doesn’t want to hold on for more and an inch or so. Kind of disappointing with the issues, but altogether it isn’t too bad.
Score: 15
Strength (0-20): A cigar that I expected to be a big heavier (medium to possibly full) ended up being nothing near it. There are some blasts of strength randomly strewn throughout, but in the long run it was a mild to medium cigar at best.
Score: 12
Flavor (0-20): The first bit of the cigar is very leathery with small splashes of both spices and some amount of coffee. While it continues to have an earthy base as it burns, the flavors transition more and more to the coffee realm of taste. The only problem is that there is an inherent bitterness that tends to go along with the taste thats slightly unpleasant. There are some minor hints of chocolate and something like nutmeg also, but it really isn’t prevalent throughout and only peeks its head in once or twice. The overall taste was enjoyable, even though it was a little disjointed. It’s not fully complex, but it also isn’t boring in any way.
Score: 16
Value (0-20): If you are paying the MSRP for this, you might be crazy…. Or you have too much money on your hands. $30.00 is a lot of money to spend on a cigar that isnt the top of the line.
Score: 1
Additional Notes: Paired with coffee at my dad’s place.
Overall (0-100): The Centurian, which supposedly was blended for a wealthy Sultan, is in no way worthy of being smoked by royalty. In fact, about the only royal thing about it would be its MSRP of $30. While the Centurian looks and tastes pretty good, there are some issues with this perfecto’s construction that need to be considered. Should you pay $30 for this? Hell no. Don’t waste your money. Go spend it on a Graycliff Chateau Gran Cru Solomon, a few Padron 1964s, or something from the Opus line. But if you can find this on cigarbid for a few bucks… then it might be worth trying.
Score: 61
Posted by Unknown at 1:54 PM

Email ThisBlogThis!Share to TwitterShare to FacebookShare to Pinterest
Labels: 60-69, gurkha