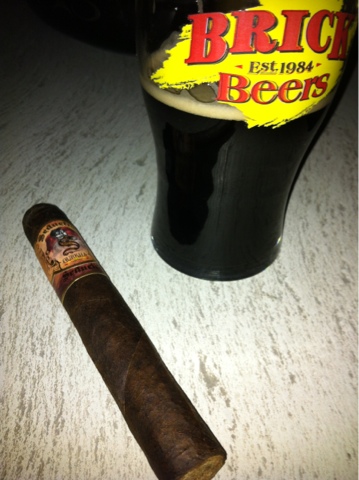 Appearance (0-20): The first thing that pops out with the Seduction is the band. It’s sleek and sexy, with an off-white backdrop and lush deeper reds coming to the forefront. A large S plays prominently in the middle, laid over the normal Gurkha label. The cigar itself has a gorgeous wrapper that was very neatly slipped around it, with no large veins (only a few smaller ones of note), blemishes, or any kind of adverse issues of any kind. There was even some nice aging on it, considering the cigar was only put out in 2010.
Score: 19 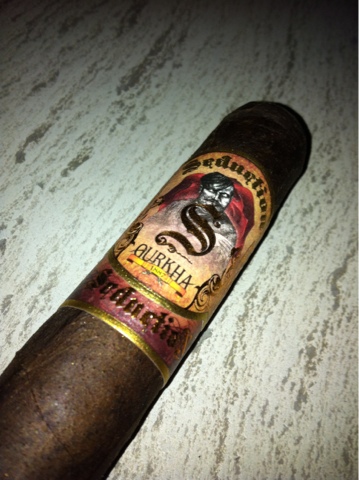 Construction (0-20): The Seduction feels just right. I’ll try to keep the sexual innuendo here, given the name. The tobacco isn’t bunched at all and I can’t locate any areas that would be loose. The wrapper feels like it has a little give, being slightly squishy to the touch. Upon cutting there is literally no debris or residue to speak of, and the initial draw is just a hair tighter than it should be. The ash stuck on the cigar for nearly two inches at a time, and the smoke was thick and luxurious.
Score: 19 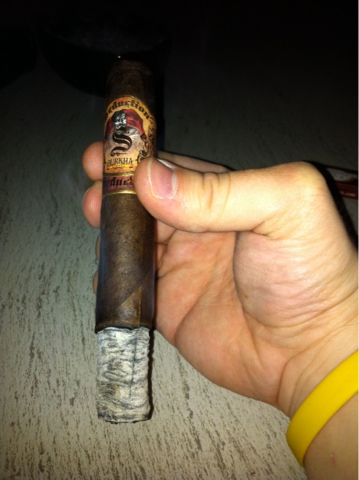 Strength (0-20):  Everything I have seen previously points to this being a medium bodied cigar, and I have no gripes with that assessment. From the first puff through the end, the Seduction is nearly smack dab in the middle of the spectrum.
Score: 19

Flavor (0-20): Both slightly complex and enjoyable, the Seduction has some nice things to offer the palette. I’m guessing they really went all in with the idea of seduction, as there are some spicy tones on the first draw that mix well with the woody backdrop. But as this is smoked, you will find very subtle hints of cocoa and coffee, especially on the finish. In the second third of the cigar you will find more of the rich cocoa flavors becoming more prevalent, but it will be enhanced by an almost malty sweetness. As you enter the final third, those same flavors seem to continue as planned, sticking mostly with the sweetness with underlying wood.
Score: 18

Value (0-20): Bang for your buck, this is absolutely one of the better Gurkha cigars I have smoked.
Score: 18

Additional Notes: Paired with Guinness on my dad’s porch. The cigar was purchased earlier that day at a small local B&M.

Overall (0-100): With Gurkha having so many lines out there, it’s often hard to tell which ones will be the hits and which ones will be the misses. Gurkha scores big here with the Seduction.  On top of being a great looking cigar, it’s well constructed, at a very good price point, and has a great flavor to match. There is very little to dislike about this cigar, and really… I plan on smoking many more. The real question is how this will age over time?
Score: 93

Email ThisBlogThis!Share to TwitterShare to FacebookShare to Pinterest
Labels: 90+, gurkha