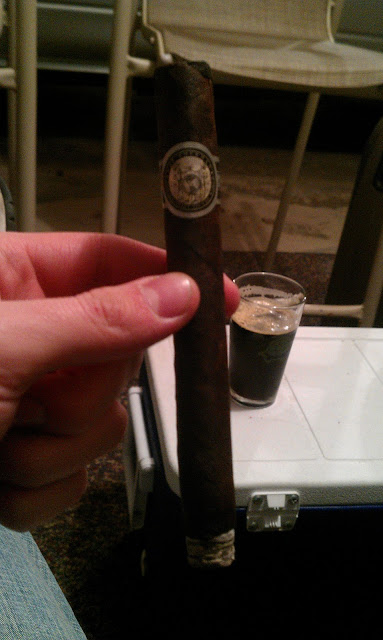 Appearance (0-20): The first thing I notice here is how dark this stick is.  The wrapper is very dark for a maduro, and could almost be an oscuro.  It is very oily and toothy from top to bottom, and really looks good.  The band is very simple, only using silver and off-white colors, with a small picture in the middle.  While it’s not something that I would probably pick out of a crowd, it not terrible either.

Construction (0-20): The cap wasn’t properly placed on the cigar, and it was peeling off a bit.  There are multiple little holes along the cigar in various places; they don’t appear to be beetle holes, but some problem with the wrapper leaf.  Upon smoking, the rest of the construction actually was pretty good. The ash was very light gray, but didn’t hold on more than an inch.  The draw was good, cool burning, and the smoke was super thick.

Strength (0-20): This one is tough for me, as I smoked this on 3 relights in about a 2 hour time period.  I didn’t have a chance to get the full heft from a “one-sitting smoke”, but I think this would hover around the low end of medium.

Flavor (0-20): This actually surprised me.  Right from the initial light, the flavor just booms right in your face.  You’ll get very strong flavors of wood and sweetness, and not really much else.  I enjoyed how strong the flavors were, but they pretty much the same the whole stick.  As I smoked down towards the halfway point, the smoke got pretty harsh. I would attribute some of that to me relighting it, but I believe it to be a cigar issue.  The flavors were still there, but the smoke became so harsh that I put it down with about 2 inches left.

Value (0-20): I got this stick in a trade, but the retail seems to be around $4.50. I noticed you could grab these even cheaper in 5-packs, so overall it’s a decent deal.  I would like to pick up another one of these, and smoke it without relighting.  I like to try new things, but I would reach for something else that I know is good, for an extra dollar.

Overall (0-100): Never having smoked a Nat Sherman, I was surprised.  The flavors were great in the beginning, and then faded away into a harsh smoke.  I’d like to smoke another one soon, and re-review without relights.  Overall, this seemed like an average stick that doesn’t do anything too wrong or too right. Re-smoke? Yes for the right price.  If I had to purchase this at retail, I would reach for something else that has more consistency.

Posted by Kollarism at 3:48 PM