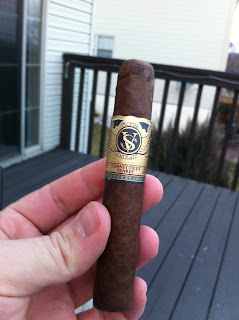 Appearance (0-20): Looking at the Connecticut Yankee reveals some rough patches, especially along the seams. There is a slight bit of discoloration near the cap, where it is much darker than the rest of the cigar. Like other Victor Sinclair cigars, this has the normal band, colored with blue to designate this as the Yankee line. There are no additional tears or anything to speak of.
Score: 15

Construction (0-20): The feel of this is pretty solid for the most part, but under the band there is an area that feels like it’s a little slim. Cutting this reveals more debris than I was hoping for, but not a ridiculous amount. The draw is a little tight to begin, and continued to be that way throughout the smoke (that is, until I hit the pocket with a little less tobacco in the last third). The burn remained extremely even, although the ashes flaked off very randomly.
Score: 16

Strength (0-20):  This nears the area that it is said to be, being a medium to full strength There is a lot to like about it, in fact, since it isn’t harsh in any way but still has some decent power to it.
Score: 18

Flavor (0-20): The beginning of this small wonder is filed with woody and spicy tastes that didn’t quite match up well, but they seemed to quickly fade for me into something more of a creamy variety. Mixed in with this were hints of coffee and chocolate, but it still held a small bite. Really though that’s where it ended. The flavor sticks with much of the same throughout the rest of the smoke, and ended up being slightly bitter at the end.
Score: 15

Value (0-20): $2.25 isn’t much to ask for a cigar, and as an everyday kind of smoke, this is absolutely worth the money and then some. I have seen them go even cheaper than this price, which is again absolutely worth it.
Score: 18

Additional Notes: Paired with iced tea on my deck. This has been aging about 36 months.

Overall (0-100): Victor Sinclair hasn’t done anything to wow me in the past, and this one didn’t either. However given the price, and the possibility of getting these cheaper in a bundle, this is a solid cigar. The construction had some small issues, and the flavor was one dimensional after the initial puffs, but it was still a relatively pleasing cigar. If nothing else, this could easily be an everyday sort of smoke that you wont feel guilty about mowing through multiple of.
Score: 81