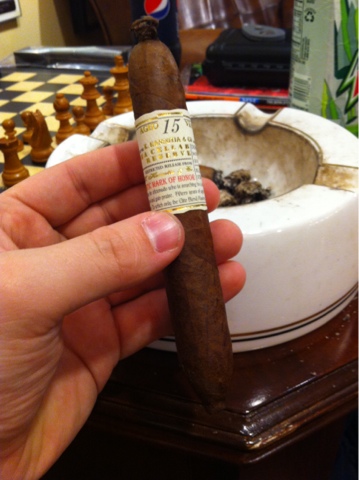 Appearance (0-20): Typical of the Gurkha line, you will find the Cellar Reserve with its own little kitschy way of doing things. This one has a wrapper that dominates about 1/3 of the cigar, proclaiming that this is a 15 year aged cigar, and points out some of the important statistics like the batch number, quantity, and blend strength. It’s actually a pretty cool concept. The wrapper itself is nice and oily with a decent sheen and it has such a rich color to it that you almost feel bad about soon having to clip off the end and light it up. There are some small veins throughout and I don’t feel the wrap job is superb, but my hope is it wouldn’t cause any issues with the smoking itself.
Score: 17 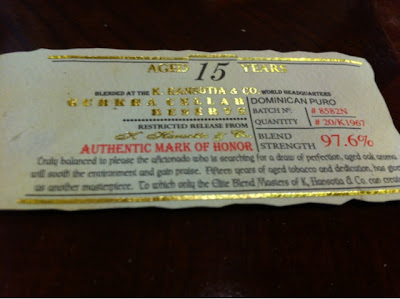 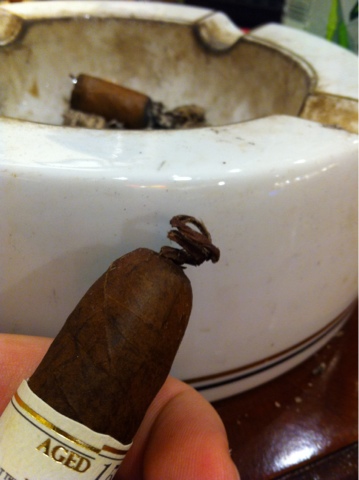 Construction (0-20): I have always loved cigars that have this kind of shape so this one is right in my wheelhouse. The end is pigtailed off and is simply well done. The remainder of the cigar feels solid, which I am pretty happy about. The only thing that does bother me is a small nick in the tobacco at the bottom of the cigar. I checked and rechecked and the best I can say is it looks like the tobacco leaf for the wrapper ends right there. It’s disappointing to see that though, as otherwise this was pretty spot on – the cut had almost no debris and it burned evenly throughout. The ash held relatively well for an inch and a half at a time, but was a little on the flaky side of things.
Score: 17

Strength (0-20):  The medium to full rating is where it’s been billed. I personally found this to be more toward the medium range of things with some random punches that sock you into the full range, but it was well balanced with the flavor profile.
Score: 18 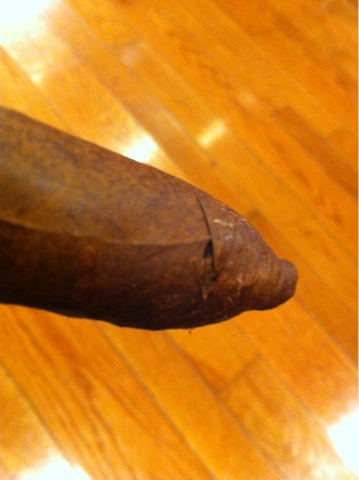 Flavor (0-20): There is an inherent sweetness that greets you with your initial puffs… but it isn’t without a spice and woody flavor. There’s almost a balancing act going on. The flavor of tobacco is really prevalent and is creamy throughout. Hints of other spices pop up toward the second third, but more importantly there is something of a sour orange flavor that you get mixed with chocolate. It’s really interesting how it all matches up on the tongue. Entering the final third all of the other flavors fade back and let the chocolate shine through the end of the cigar. It was a really interesting and thoughtful way to end off.
Score: 19

Value (0-20): $10 won’t kill the bank account, but it’s not exactly value packed either. If we take aside the issue with the nick and the wrap job, I would have to say it’s worth the cost. Is this a bargain? No… but it is solid. That being said, an MSRP of $10 isn’t anywhere near the top of the price scale for Gurkha.
Score: 18

Overall (0-100): There were some minor construction issues but the flavor profile is both complex and interesting. I found it really enjoyable despite the odd pairing of flavors (sour citrus and chocolate) without being overpowering in any way. Then at the end to pad the cigar with the natural chocolate sweetness is nearly genius. I wish the construction didn’t have an issue, or this could easily have topped the 90 point mark. But given how tasty this one was, (and taking apart the construction issue) consider it a possible sleeper in the $10 range.
Score: 89 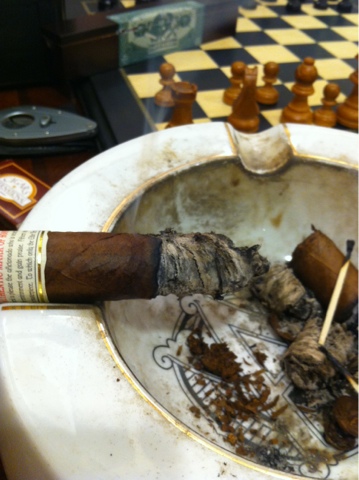 Additional Notes: Paired with water at cigars international.
Posted by Unknown at 3:06 PM