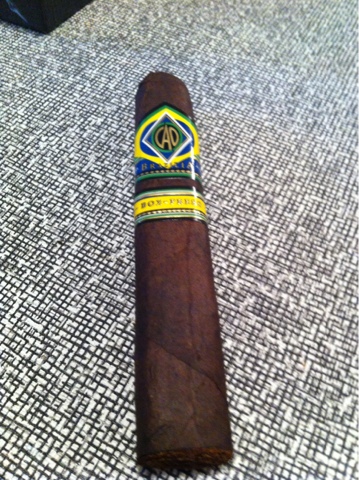 Appearance (0-20): Much like its big brother, the original CAO Brazilia, the band is the colors of the Brazilian flag with blue, green, and yellow. To go along with it is a second band that compliments the first while showing off that it is a box pressed cigar. The exterior wrapper has a very nice darkness to it, but there are some noticeable veins that litter across it, and I would call them roughly medium in size. Otherwise, it looks relatively solid.
Score: 16

Construction (0-20): This is one area where I had some minor qualms, but really nothing to scoff at. Box pressed cigars don’t always give me the best gut feeling, as I have had my share of poorly constructed ones. This guy here… is not one of those. The initial feel was positive, with very little in terms of possible gaps of tobacco. Cutting the Brazilia was not only quick and painless but was also nearly excess free. After lighting there wasn’t a point in the entire cigar that it didn’t stay even. And finally the ash stayed on for almost two inches in each pop. This one is a well-constructed cigar.
Score: 19 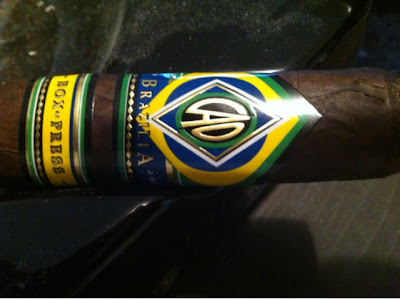 Strength (0-20):  This is another medium bodied cigar that really sticks right in the middle of the range for the majority of the smoke. I would say it slips a bit toward the mild end of the spectrum, but that actually works to the Brazilia’s favor given the flavor profile.
Score: 18

Flavor (0-20): The initial light has a slight bit of pepper left on the tongue, but it fades rather quickly into a coffee with cream taste, but it remains almost earthy at the same time. It has a slight bitter tang to it that is counterbalanced well with the cream and soon after, the almost unmistakable taste of dark chocolate. At this point in the smoke, its more toward the mild end of the spectrum, slowly building up strength. The concentration of flavors increases in the second half of the cigar; with the Brazilia bringing more of the dark chocolate to the party and adding back the peppery spice that was hit on the initial draw. By the final puffs, I found the dark chocolate taking over and pushing the pepper out of sight and mind.
Score: 18

Value (0-20): For the price, this is likely a decent alternative to an infused cigar, like the Drew Estate Java. It’s a bit cheaper, and for the cigar purists out there it’s a cigar that has distinct dark chocolate and coffee tones that are enjoyable.
Score: 18 Additional Notes: Smoked in my garage, paired with Guinness.

Overall (0-100):  The main flavors of the CAO Brazilia Box Press are ones that I typically enjoy with cigars – coffee, dark chocolate, some spice, and some supporting undertones. However, I also find myself looking for a bit more complexity than I was given. A few points taken away in each category really nickeled and dimed the Brazilia down a few notches, but the honest truth is this is a very well-constructed box pressed cigar that isn’t insanely expensive at $5.50. The medium strength mixed with the flavors makes this the perfect cigar to pair with coffee on a cool summer morning while relaxing outside.
Score: 89