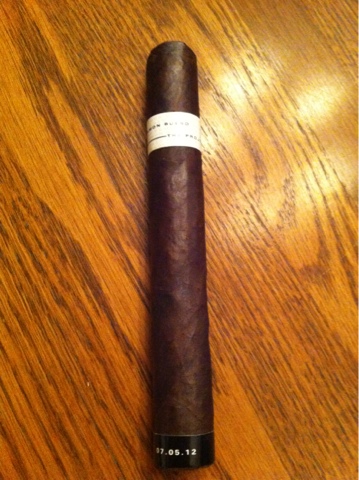 As a quick backstory to this cigar – At Cigarfest 2012 there were a bevy of yellow street sign like stickers that asked “Who is Ramon Bueso?” with a date on them of 07.05.12. The sticker included this website along with it. In the meanderings through the different tables, we found that Ramon Bueso was there, and his cigar – “Genesis The Project” was being given out. 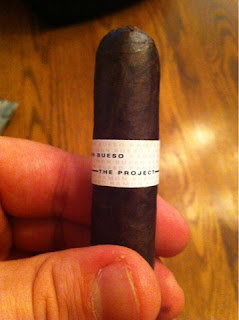 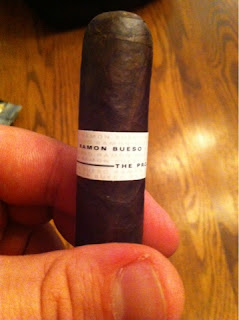 Appearance (0-20): The Project has a gorgeous deep maduro wrapper that looked and even felt a bit oily to the touch. It was impressive right off the bat, using two different bands – one along the top in shades of grey, black, and white which called out the cigar as Ramon Bueso’s “The Project”, with the other being black with white writing, noting the 07.05.12 date. The wrapper sported no major visible veins, and it really took some sleuthing to even find a couple of minor ones.
Score: 19 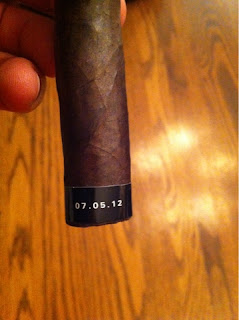 Construction (0-20): The sleek exterior felt very well packed. Testing various parts of the cigar yielded no areas of concern at all. The foot had some nice ligero, but it was well dispersed. The cut was near perfection, with very little excess debris. More impressive yet was the draw, which was also nearly perfect. This, for lack of better words, burned cool down to the nub while staying almost perfectly even when burning. I’m going to immediately apologize for not snapping more pictures of the process, as the ash held on for half of the cigar each time. Due to smoking this outside around midnight, I couldn’t get a great picture.
Score: 19 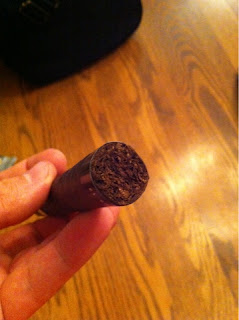 Strength (0-20):  Since there is little in terms of where this should sit, I had to rate it against the flavor and complexity to strength. Needless to say, it’s very well balanced with the other characteristics, hanging out in the medium range.
Score: 18


Flavor (0-20): It’s absurd to think that this cigar could get much better than the billing from the notes above, but the flavor is incredible. It begins with some nice peppery spice, but is counterbalanced by a sweetness that is akin to black licorice. Smooth spices fade in, dropping the pepper back a bit when you hit the one inch mark but it retains the sweet licorice. The spice that continues to meld in is one of nutmeg with a very distinctive woody flavor. Slight nutty flavors are intermingled around the halfway point, blending almost perfectly. In the last third there is a move away from the former flavors, where it transitions into a coffee with cream taste. The complexity is nearly perfect while staying very well balanced. The flavors work together completely.
Score: 20

Value (0-20): At $5.50 this is a steal of a cigar. Box prices at the moment (since it is prerelease pricing) have this slated at $4 for this size. It is easily a cigar people would pay double or even more likely triple for. available at Cigars International
Score: 20

Overall (0-100): When smoking and reviewing this cigar, it was really tough to take away points. The reality is I was nitpicking and it still scored outstandingly.  While the cigar isn’t perfect, the pricepoint is amazing for the flavors, complexity, strength, etc. Factor in that the flavors of this are very distinct and harmonious, and you have a home run of a cigar on your hands. At its current presale price, I would venture to say this isn’t just box worthy, but instead it’s multiple box worthy. Genesis The Project could easily be compared to the Liga Privada No. 9, with a cheaper price… which is alluring. I personally am having a hard time not dropping the cash on a box right now, even though my humidor is nearly full. If I had to make a prediction, this may very well be the next cigar that becomes hard to find very very quicky, as anyone who I have talked to that smoked it can’t stop raving about it and many have already preordered multiple boxes. I would recommend getting your hands on some of these before either the price jumps up or this becomes akin to the Liga Privada Flying Feral Pig with little chance of seeing one in the wild.
Score: 96