Who is Jonathan Drew? 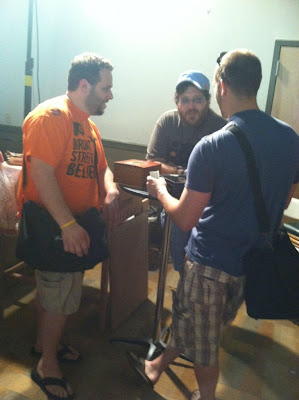 To be honest, I didn’t know much about Liga Privada, Drew Estates, or Jonathan Drew in general.  I’ve smoked many of their cigars, but never knew much other than that.  After this past weekend, that has started a change in me, and hopefully you.

This weekend I attended Cigarfest, hosted by Cigars International, for the 3rd year with my brother, dad, uncle, and some friends.  It’s always a great experience, and possibly the best cigar show in the country.  Jon Drew joined reddit cigars a few weeks ago, and said that anyone attending Cigarfest should come say “Hi.”  I’ve met some of the other guys in the industry before, so my brother and I figured we would meet up with Jon.

After snagging our cigars, we headed over to the line that had formed to meet with Jon Drew.  Most lines moved pretty fast in events like this, except this one.  It was painstakingly long.  There were probably 25 people in front of us, and we just kept waiting….and waiting….and waiting.  We smoked cigars, drank, met some guys in front of us, bullshit with them, and mainly complained about how long this was taking.  After about 1.5 hours, we were halfway and committed to staying inline.  Bladders were full, patience was thin, and we were hungry and irritable.

Finally after just over 2.5 hours, we made it to the front of the line to meet Jon Drew.  We mentioned that we were from r/cigars and waited almost 3 hours.  He apologized to us and thanked us for waiting, but what he did next was awesome.  He turned to the remaining 25 people in line, apologized for the long wait, and told the bartender that anyone can order whatever they want on his tab. Awesome.

Getting back to the conversation; this wasn’t just a bullshit session that you will get from some other guys.  He legitimately wanted to learn about each person that he spoke with.  He asked our names, and addressed us as such. He wanted to know what we did for a living, cigar we smoked, how we review cigars, etc.
I mentioned to him that we couldn’t find the flying feral pig or dirty rat in our area.  His basic response was that he wasn’t going to overproduce his product and release an inferior product.  Jon explained his process to us and that he will never skimp on quality for quantity.  Some other companies will mass produce a certain line of cigars, insert another kind of filler into the blend because they are running short, and ruin the experience you had with that particular blend.

If nothing else, everyone should know Jonathan Drew is a class act.  He is so passionate about his product and took the time out to speak with his consumers about the cigar culture and his product.  If I didn’t already smoke his product, then I would now.  I would highly encourage anyone to read up on the history of Drew Estates and smoke some more cigars, because I sure as hell will be.  2.5 hours of waiting for a 20 minute conversation is something that I never thought I would do, but I would do it again.

Thank Jon for taking your time our yesterday, and you have solidified another lifetime consumer and advocate for your product line.
Posted by Kollarism at 9:36 PM