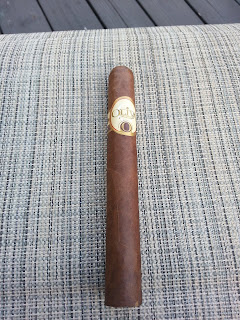 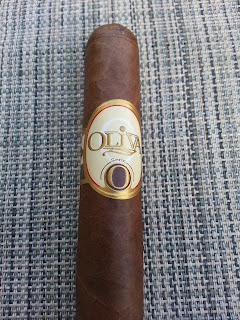 Appearance (0-20): Initially I’m pretty happy seeing the Oliva “O” that’s sitting in front of me. It’s nicely wrapped and has an attractive gold, maroon, and yellow band. There is a small chip out of the tobacco at the foot and another small blemish by the cap, but overall it looks put together well. Otherwise it’s got a nice latte-esque color to it… the type where you’ve put just enough cream into your coffee so it isn’t dark, but not too much that its mostly milk.
Score: 17 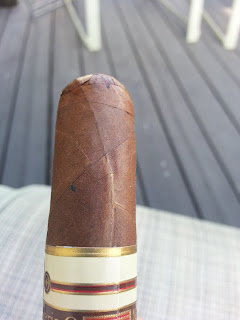 Construction (0-20): A decent amount of shavings came off the end when cut, but no more than usual. The overall feel of the cigar was that it was well packed, and it left ample room for an easy draw. While burning, it retained the same characteristics while keeping a nearly straight burn. And to go along with the burn was a solid light gray ash that held on for two inches at a time. Unfortunately, it did require a relight as well as some touching up in the last 1/3.
Score: 17

Strength (0-20):  If you want something that truly personifies what a medium to full cigar should be, I believe this is it. It had enough kick to it to make you know it’s there, but not so much that its overpowering.
Score: 19 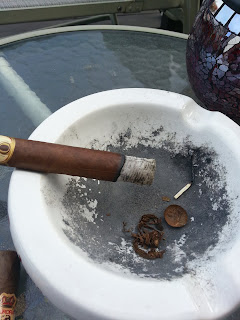 Flavor (0-20): Rich earthy tobacco flavors mix very well with a very staunch wood (mainly cedar) taste… but without the other complimentary flavors, it wouldn’t be half as good as it is. Toast, leather, coffee, nuts and both slight spice and slight sweet are also found within this smoke. The overall blending and mixing of flavors is outstanding, as it is complex while keeping from being confusing. There are a couple of transition points where it’s not completely seamless, but otherwise it’s a solid smoke.
Score: 18

Additional Notes: Smoked on my deck with a little Johnnie Walker Gold Label.

Overall (0-100):  Oliva has put out some outstanding items, and this Nicaraguan puro comes close. Some small construction issues kept this from excelling further, but it’s definitely a good price for a 7x60 with a nearly harmonious flavor profile. Another item in its favor is that it really does hit the medium to full range, where others billed as that miss the mark. Overall it’s not only a cigar I would smoke again, but one I would recommend trying. I plan on picking up some other sizes of this.
Score: 89

Email ThisBlogThis!Share to TwitterShare to FacebookShare to Pinterest
Labels: 80-89, Oliva