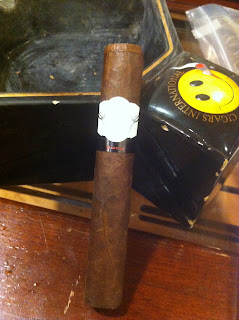 Appearance (0-20): First look from this screams elegance. The Sencillo label consists of a scripted “S” embossed in silver on a white background, with a black portion of the band sporting red writing. Its perfectly done to grab ones attention and simultaneously say “this is an elegant, graceful smoke”. I imagine it being Mad Men-esque… sitting around with executives, passing these around. It’s supported further by a darker Habano wrapper. There are a few veins that are visible, but the overall appearance is one that is both inviting and intriguing.
Score: 18 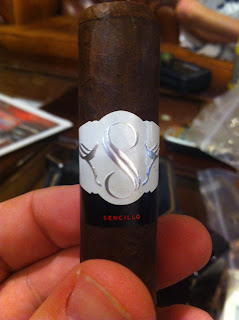 Construction (0-20): The initial cut revealed only a small amount of debris, which was highly acceptable. Feeling down the length of the cigar, there were no real causes for concern. No visible cracks, no chips. Actually all in all, there was nothing of major note in the negative concern. It’s dark and oily, feeling just right. The pre light puffs were a little loose for my liking, but again… nothing earth shattering. During the smoke the ash held for an inch and a half at a time before toppling off.
Score: 19

Strength (0-20):  Medium to full? Sort of... The majority of the stick was closer to the medium end, with it hitting its high around the midpoint before jumping back to medium again. Honestly, this is far from full, and barely jumps above the medium range at all.
Score: 17

Flavor (0-20): Deep down this cigar wanted to be two separate things – something sweet… and something earthy. Yet somehow the blend actually works well at doing both in unison without overwhelming the taste buds. Immediately after lighting this, its balls to the wall with the leathery and earthy flavors, but there’s an inherent sweetness that keeps it grounded. There are continual touches of cocoa, sugar, and cinnamon as you work throughout… but some other kicks like black pepper.
Score: 18

Value (0-20): When you begin to hit the $8.50 pricepoint, you are beginning to dabble in the range of a lot of quality cigars. That being said, this is one who I think would contend well with the things out there.
Score: 18

Overall (0-100):  When I began puffing away, I had no idea I was smoking a cigar from the likes of God of Fire (specifically with the work of Nestor Plasencia). But I’m glad I gave this one a whirl. The overall elegance of the band, coupled with the look of the cigar is enough to draw you in, and the flavors are good enough to keep you there. While we aren’t working with earth shattering stuff here, the reality is the flavors are expertly intertwined for a price that isn’t outrageous. Its complex without being confusing, a solid construction, and honestly… its flat out billows smoke. I would recommend this one to people looking for something with some complexity that hits the medium bodied range.
Score: 90
Posted by Unknown at 8:41 PM

Email ThisBlogThis!Share to TwitterShare to FacebookShare to Pinterest
Labels: 90+, God of Fire, Sencillo