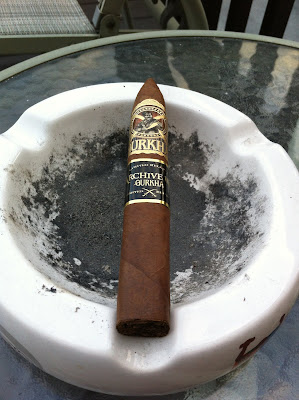 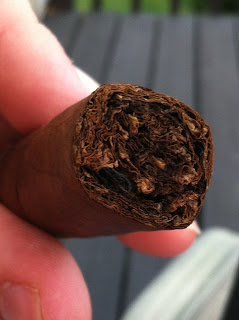 Appearance (0-20): Following the norm, Gurkha has its emblem embossed on its top label. The secondary black and gold band is one stating that this is the Limited Reserve, Archive 1887. The torpedo shape looks really nice on this, and I find I prefer it to the other sizes of this (the Toro and Churchill both have a smaller ring gauge). It’s well wrapped with a nicely colored leaf. The bottom reveals a nice chink of deep colored tobacco, which I can’t want to light up.
Score: 19

Construction (0-20): Initial cut revealed nothing in terms of debris. The entirety of the cigar felt well packed, though the draw was a little bit tough. Post lighting the draw opened up a little but it still remained a little tight for its own good. A little surprisingly, the ashes held pretty well (1.5 inches in a clip) in spite of the flakey dark ash. The burn was cool, and thankfully no burn issues persisted.
Score: 18

Strength (0-20):  Medium to full. I don’t feel it that this one was that strong actually. The Archive sits at the medium range, though it does touch both the mild and full strengths.
Score: 16 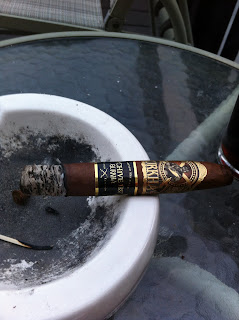 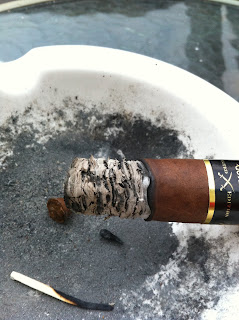 Flavor (0-20): The first few puffs give some rich peppery spice to you, but before even hitting the 1 inch mark, the pepper fades to the background and slight sweetness and earthiness begin to take shape. The sweetness comes closer to the forefront of things, along with a slightly bitter coffee. There are some minor hints of chocolate and espresso in the second third, with some underlying pepper to back it up. The same sweetness and coffee remained prevalent through the final half of the cigar, though it didn’t really come out very complex besides those flavors.
Score: 17

Additional Notes: Smoked on my deck, paired with a Guinness.

Overall (0-100):  There are some nice flavors in the Archive, with something akin to a sweet coffee that has some spice on the back end. It burns nice and cool, the ash holds relatively well, and it isn’t absurdly priced (relative to other Gurkha’s MSRPs). It was pretty much consistent from start to finish. That being said I don’t think I would go out of my way to find one of these since I prefer more complex cigars, and this isn’t it. After smoking it, I feel like I can honestly say “I don’t love it and I don’t hate it”. Still – it wasn’t too bad at all…
Score: 87 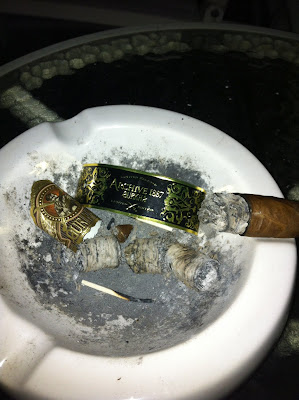