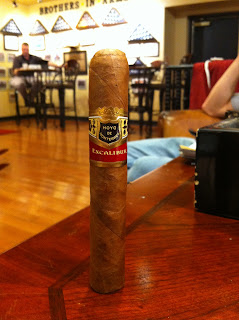 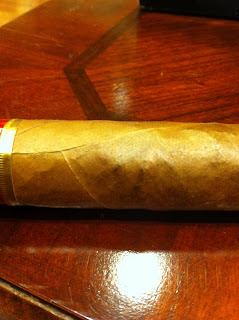 Appearance (0-20): A light colored Connecticut wrapper adorns the outside of this cigar that is complimented by the gold, black, yellow, and maroon label. There are some slight variations in color with a small bulbous area just below the band. Small veins can be seen randomly along the entirety of the cigar. The overall feel though, is a good one.
Score: 17

Construction (0-20): I had nearly no qualms with the construction of the Excalibur: the initial cut revealed no debris, it was packed very well, the draw was perfect, the ash held on for multiple inches at a time, and the burn was close to perfect. The only knock at all would be the slight bulbous area that was mentioned in the appearance section.
Score: 19 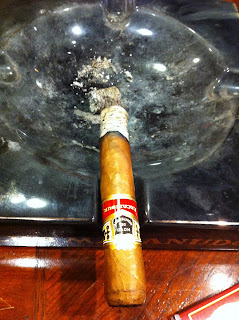 Strength (0-20):  Full. And let me be the first to say that this really does smack the full range pretty well. From the get-go, I felt the massive tobacco hit with amazingly spicy flavors. Well done.
Score: 19

Flavor (0-20): A rich peppery flavor is prevalent throughout, but it is well balanced with creamy and oily flavors. Hints of vanilla come through along with oak and leather. The finish gives off a bit of a spicy cinnamon… like eating some hot cinnamon candies. But that’s where it all stops. The flavors continue to go on much the same throughout, with small variances in their potency. Complexity is slightly lacking here, but the flavor is power packed.
Score: 17

Additional Notes: Smoked at Cigars International and paired with Gatorade. 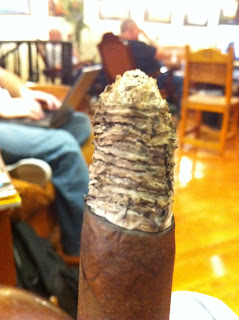 Overall (0-100):  The flavors were ones I enjoyed a lot with rich spice that held quite the kick. Unfortunately the lack of complexity is something that bothers me. That being said, this isn’t bad stick by any means – it’s well-constructed, looks good, burns well, and has great (though nearly one-dimensional) taste. And if you are looking for something that will consistently be a full bodied cigar with big flavor – this is it. But if I had the choice, I would snag some lesser priced sticks that deliver more complexity for the money. It’s definitely a cigar I would choose to smoke from time to time when I just wanted to kick back, relax, and simply let the flavors take over without being burdened by figuring out the more complex stuff.
Score: 89 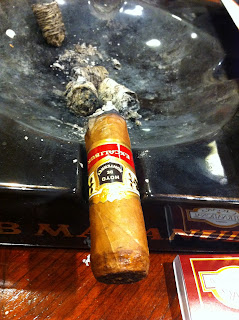 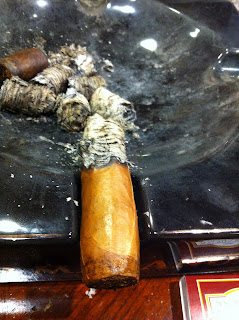