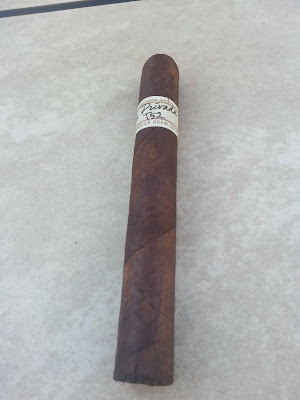 Appearance (0-20): There is nothing to not love about the first appearance of the cigar. The T52 has a great deep Connecticut Broadleaf wrapper that is practically coated in oils but sports a slightly reddish hue to the tobaccos. The simply "written" style band proclaiming that its made only for the boss is a nice touch. The colors of the band also seamlessly entwine into the wrapper, as not to clash at all. Its a nice size with what seems to be the right amount of heft.
Score: 19 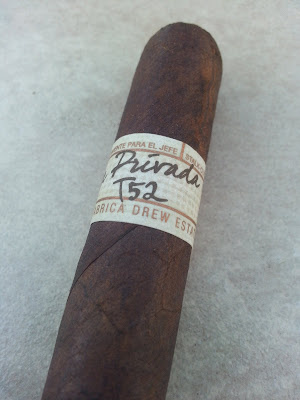 Construction (0-20): Upon picking the cigar up, you can tell that it is well packed. There are literally no gaps that I feel that would cause me any concern, and there are (perhaps most importantly) no areas that feel uneven. Upon cutting the T52 there was nearly no debris, and it gave a prelit draw that was slightly tough. After the first inch or so of smoking, however, it loosened up perfectly and continued to have just the right slight amount of resistance. The burn stayed relatively close to straight with some small runs, but nothing of major concern. The ash was very tight and controlled with little flaking and had a really rich gray color. No retouches needed on this at all, and I am happy to say the ash held for at least two inches at a time, and sometimes it held out to nearly 3 inches.

Strength (0-20):  Full. The nicotine kick in these is a pretty swift one right in the pants region for sure, however its well blended with the right spices to keep it from being overpowering.
Score: 19 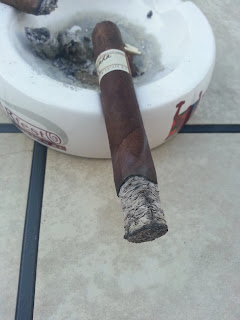 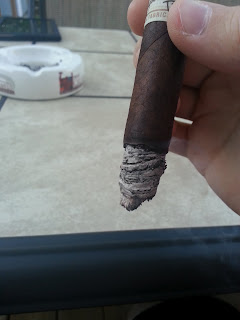 Flavor (0-20): Sometimes a cigar hits you so well with flavor that you don't even know where to begin. This is one of those smokes for me. Very woodsy flavors came through to begin, and a backdrop of leather mingled in with a really peppery finish. The retrohale gave an additional pepper blast that was extremely appreciated. But as I traversed through the cigar I was greeted with cocoa, coffee, and some bold earthier notes. And don't forget that wonderful pepper throughout. Honestly the complex levels developed in here are outstanding, and are melded expertly to keep from a disjointed feeling.
Score: 19 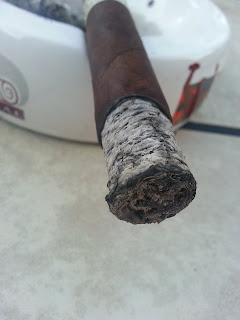 Value (0-20): $12.00 for a cigar begins to get into a little elevated of a price range, but when considering the quality of the craftsmanship, you truly do get what you pay for here.
Score: 19

Overall (0-100):  When looking at cigars that top the $10 pricepoint, its often hard to consider it to be a "value" type of cigar. But there are those unusual gems that you not only get what you pay for, but you get something even better than you pay for. The mantra I heard from Jonathan Drew of "we wont force production out the door to make a few extra bucks, because we wont compromise our product like that... we are putting out a quality product and that takes time" is really evident with the T52. Its hard to get your hands on these in a lot of areas, but it is indeed a quality product at a fair (if not favorable) price. From beginning to end the Liga Privada T52 has some wonderful peppery blasts mixed with a complex layering of flavors that is outstanding. The overall construction, appearance, burn, and strength are tough to beat... and all in all this cigar is a winner on multiple fronts. As I said earlier - you get what you pay for sometimes - and this is worth every penny. Kudos Drew Estate.
Score: 94