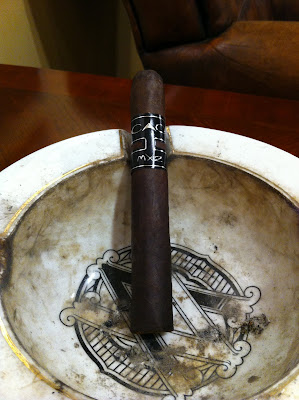 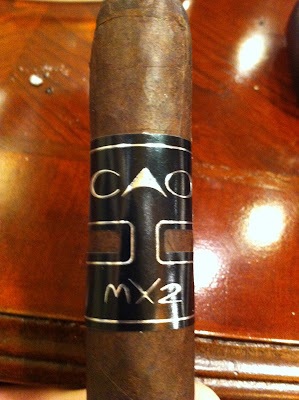 Appearance (0-20): A rich, dark Connecticut broadleaf wrapper couples with a silver and black label to give a very nice first look. The tobacco itself feels oily to the touch and I cant wait to give this one a whirl. The foot of the MX2has an interesting looking mix of filler and binder tobaccos, ranging from deep brown colors to slight tans.
Score: 19

Construction (0-20): No worries from the get-go as there is hardly a vein of note on the outside of the wrapper to see. The feel I your hand is perfect, and rolling along the cigar reveals an almost completely even feel – no tobacco out of place. The first cut left a bit more tobacco debris than I was hoping for, and it put me into a mindset that was one of worry and concern, but thankfully it wasn’t an indication of how the rest of the cigar would be. The draw was perfect, and the burn was almost spot on. I had no times where I needed to relight or touch things up, and it held its ash for over an inch and a half at a clip.
Score: 19 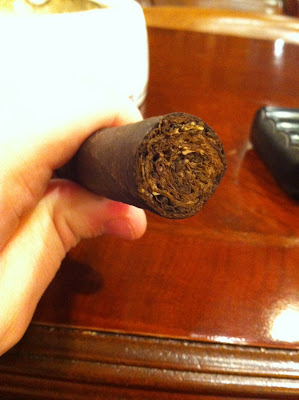 Strength (0-20):  While I have seen this run the scale from medium through full, I don’t know where I would place it. Having smoked many of these, it’s hard to know what to expect when it lacks the consistency in its strength.
Score: 15

Flavor (0-20): Complexity seems to be the name of the game in this cigar (at times), which is likely due to the mixture of binder / fillers in this. When you hit those points, it’s a pleasant juxtaposition going on between spicy and sweet. It’s a very smooth cigar that billows thick smoke that tends toward a spicy and peppery realm with hints coffee and rich tobacco tastes. But at the same time I found lulls where it felt like it was missing something. It was almost as if the MX2’s transitions were way too long when moving from one subset of tobacco to the next. For every wonderful point, I felt there was a negative, so it was a bittersweet experience for me. Unfortunately, again, consistency was a problem.
Score: 15 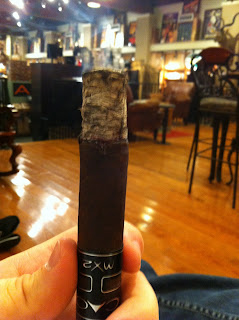 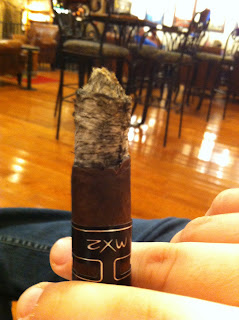 Overall (0-100):  It is really tough to give a great rating to a cigar that I have found so inconsistent. When it’s bad, it’s a mediocre cigar at a $6.00 price. When it’s on though, the MX2 has the capacity to be a wonderfully complex bargain of a cigar. After having 6 of these to make my assessment, it was a clear split between the two ends of the spectrum. But no matter the cigar – the construction and appearance were always just fine. So the real question becomes: do you want to play a $6 game of Russian roulette? If it were me personally, I’d pass on this one as I prefer to know what I’m buying (especially given that there are so many other consistent cigars in this dollar range, or less for that matter).
Score: 84