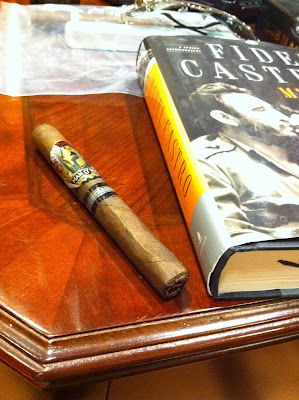 Appearance (0-20): The Little Devil really is a small cigar, given that it is only a 44 ring gauge, and just 5.5 inches in length. The tobacco color is nice and dark for the sun grown tobaccos, with the normal primary Man O’ War band with a secondary band that labels this the Little Devil. The wrapper itself some bubbles where the below leaves have veins, so there is slight cause for concern. The end is actually pigtailed off. Nice look, though some small issues.
Score: 17 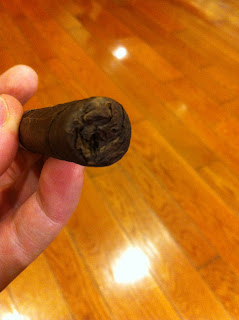 Construction (0-20): As noted in the appearance section, the small ridge gave me some slight concern. Thankfully, the remainder of the cigar looks and feels absolutely perfect. The cut revealed a little more debris than normal, but not so much that it was hazardous. The draw was nearly perfect pre-light, and continued to be great throughout. The ash held to the two inch mark before teetering off. The smoke coming off also was superb with huge thick plumes.
Score: 17

Strength (0-20):  Listed as medium to full, I think it does indeed his that mark pretty well. There is a lot of kick in the cigar, but it’s tempered by some of the other flavors.
Score: 19

Flavor (0-20): When lighting up you are immediately going to be struck by a peppery blast from both the normal inhale and the retrohale – which is of course why it’s such a “Little Devil”. There are some wonderful flavors that show through this from an earthy core that drapes cocoa against it… but on the backend there is always a nice heavy pepper backing. When moving throughout there are some leather and woodsy flavors that replace the cocoa, and it eventually has some delicate sweetness and cinnamon spice. The stick is on the complex side of things, but there is always a pepper backing to create a really interesting counter.
Score: 18

Value (0-20): Although for $5.00 this is a smaller cigar, the intense flavor and heavy smoke allow this one to stay in the positive realm of valuation.
Score: 18 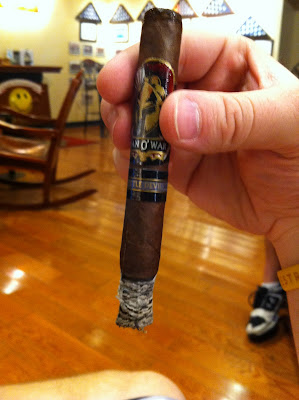 Overall (0-100):  The Man O’ War side projects have given some interesting designs (52-c) and tastes (Little Devil) instead of the normal Man O’ War line. This particular one lives up to its name though in terms of both complexity and spice. The basic gist: it’s got nice complexity for such a small stick, but packs the power of some larger ones. The pepper blasts are huge and pronounced, but seem to be balanced very well otherwise. Some small construction issues exist, though the price is right… give this one a try, but be prepared for it to be a “Little Devil”.
Score: 89