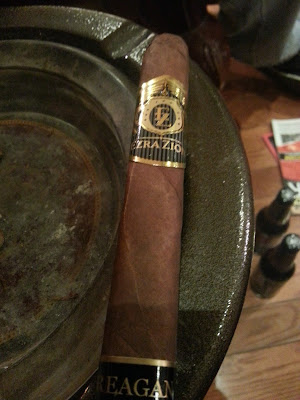 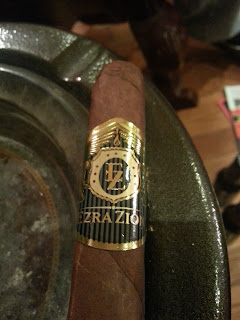 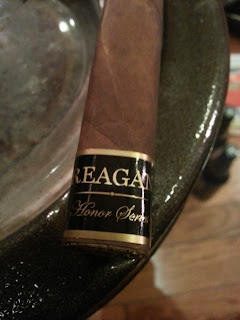 Appearance (0-20): I enjoyed the presentation right off the bat. I’m a sucker for a good box pressed cigar, and this has all the makings of one. The habano wrapper has a very nice tint to it, and it is wrapped very well. There were very few small veins along the exterior and it was very silky to the touch. The black and gold bands portray something almost royal, backing this being part of the honor series. The top band actually reminds me a lot of an upscale designer label for clothing or cologne – again giving the impression of something of status. The bottom band is what denotes this as being the Reagan, part of the Honor Series. This is a good beginning to the cigar for sure.
Score: 19 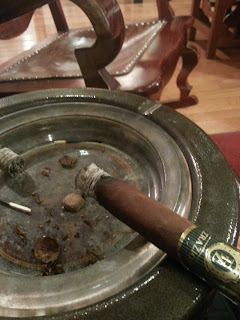 Construction (0-20): The initial feel was prefect. I couldn’t locate any spots to be concerned with when pertaining to either over or under stuffing of tobacco. The initial cut yielded almost no excess tobacco at all. After cutting, the draw was absolutely perfect, with just the slightest resistance and a touch of some kind of chocolate. So far, so good. The Reagan lit up easily, striking an even balance. Had it stayed like this I would have been absolutely delighted with the construction. The unfortunate thing is – it didn’t. The cigar canoed on me. Taking a look at the side, you can see that it appeared to be an issue with how the tobacco was set. I touched this up a bit and got it back to an even state. From there the ash held extremely well (2 inches+) and it burned completely evenly.
Score: 16

Strength (0-20):  I haven’t seen too much on this out there just yet, so given that it’s a habano wrapper with Nicaraguan tobaccos, I expected a medium to full sort of cigar. I would say it delivers that very well.
Score: 18 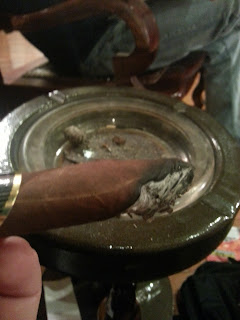 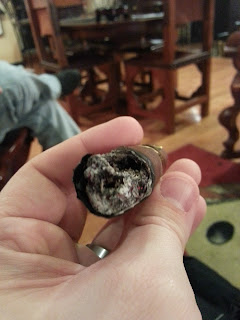 Flavor (0-20): The initial puffs have a natural sweetness to them with a beautiful spicy counterbalance on the retrohale. Its sugary taste has something of a vanilla undertone and its extremely creamy. The prelight taste comes through also, mixing some chocolate into the mix before long. As you progress, the vanilla begins to morph and a distinct caramel taste comes out with the spice on the retrohale fading back just a tad. There are some interesting background flavors that blend in too, giving both a leathery flavor and a slightly smoky accent. In the home stretch, I found the chocolate flavor to come back in full force, blending perfectly with the caramel tones. This was truly an enjoyable smoke with masterful transitions.
Score: 19

Value (0-20): Given the intense flavors in this, and even despite some construction issues, I would still consider this to be a good value at $12.50. Although it doesn’t top a couple of other cigars in the price range, I still believe it belongs in the top tier of the $10-20 range.
Score: 18 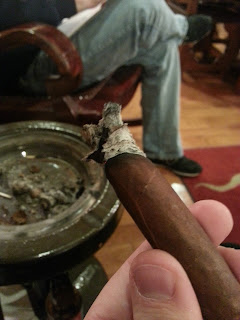 Overall (0-100):  If you have smoked an ACID cigar in the past and thought it was a little too overwhelming – perhaps this is a better cigar to look at. This Ezra Zion offering has all of the sweet characteristics of an infused cigar without the overpowering nature to it. The flavors are woven perfectly, giving a really unique and enjoyable smoke throughout, especially considering the transitions are nearly seamless. At $12.50, it’s a bit pricey but well worth every cent. While there was a construction issue with mine, I would actually ponder grabbing a few more of these to test it out before giving a final verdict if that is indicative to the entire line, or if I just got a bum stick – though there are some other factors that should be considered anyhow: box pressed cigars are notorious for construction / burn problems, this could simply need some time to sit, etc. But again, even with the canoeing, I still found this to be a delightful smoke and would recommend it to others.