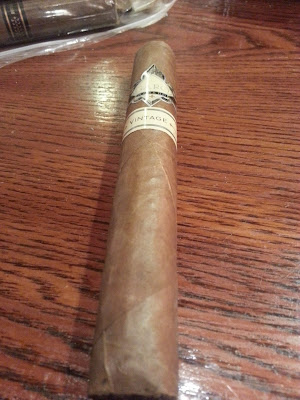 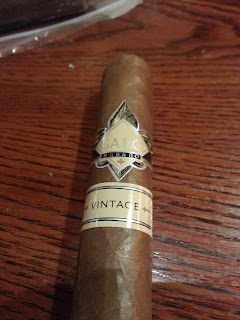 Appearance (0-20): The Vintage follows the same path as the Garo Double Habano, using simple designs for their bands, although these are in a cream and black instead of the norm. It may not be the most eloquent, but it works. The habano wrapper looks pretty solid, although there are some minor veins of note. Its wrapped well regardless. Overall it’s pretty inviting.
Score: 17

Construction (0-20): The cigar felt solid from top to bottom with no causes for concern at all. The wrapper was just the right softness, and with a quick snip of the end it revealed little debris. It lit up easily and burned relatively evenly throughout the entirety of the stick. Ashes held for over 1.5 inches at a time.
Score: 18 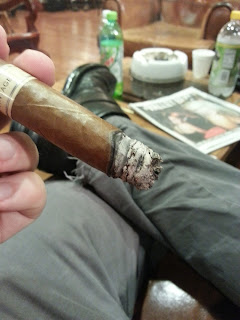 Strength (0-20):  Listed as medium, it hits the nail on the head. From beginning to end it consistently sticks in the correct spot with little variation away.
Score: 19

Flavor (0-20): The flavor profile is extremely solid throughout, but therein lies the problem too. It has a very nice cedar taste that melds well with a rich coffee flavor. There are some additional spices in the background though none are very predominant. Upon retrohale, a fair amount of pepper is there… not overwhelming, but it is noticeable. The real issue is that I found the taste to be one dimensional. There is nearly no variation of flavors through the stick. The flavor is good, and well pronounced, but it lacks excitement. Given that it is indeed a good combination of flavors, i cant knock it too much, however, I also am always looking for a more complex smoke.
Score: 14

Value (0-20): The value on this one just isn’t there... Especially considering the Garo Double Habano of nearly the same size, can be purchased for $2.00 per stick in a bundle.
Score: 12

Overall (0-100):  The original Garo Double Habano is a really decent smoke for a cheap everyday kind of price. The Vintage, unfortunately, does not fit the same mold. Retailing at over $8.00 per stick, there just isn’t enough to love about this cigar to invest the money into it. While the flavors of coffee and cedar are pleasing, it’s extremely one dimensional and unexciting. On the positive side, it is well constructed and falls smack dab in the middle of the medium strength category. Still, I would recommend picking up 4 of the Garo Double Habanos over this one for the same price. If I was handed this smoke, I wouldn’t toss it out… I would just save it for a time that I didn't plan to pay much attention to the cigar at all...
Score: 80 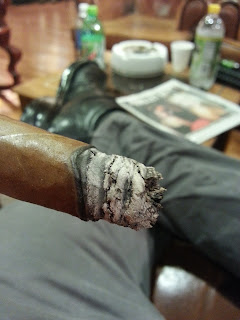 Email ThisBlogThis!Share to TwitterShare to FacebookShare to Pinterest
Labels: 80-89, Garo