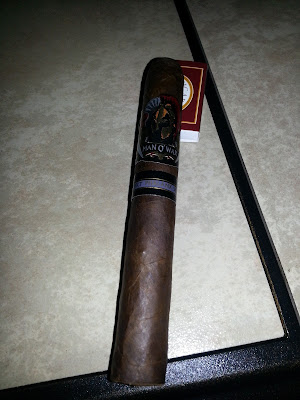 Appearance (0-20): AJ Fernandez works his normal magic, utilizing the Man O’ War line to its fullest – complete with the normal Man O’ War band and a matching one that proclaims this “Side Project: Phalanx”. With this impressive 6.5”x56 you have all the workings of a big beefy stick right off the bat. Wonderfully dark and inviting, with only small veins along it and a small simple of tobacco, this has the promise of being something good.
Score: 18 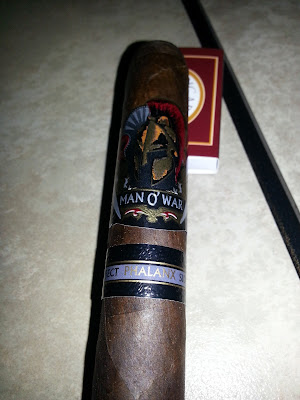 Construction (0-20): The initial cut on this one revealed no residue whatsoever. Taking in the prelit draw though, was a little on the tougher end. Lighting the Phalanx up was no problem, but unfortunately the draw remained slightly tight through most of the smoke. While it wasn’t a detriment, it was a slight annoyance and pulled down the experience a bit. The burn was cool throughout, but it had a slight pull to one side, thus keeping it from being completely even. The ash held on for almost 2 inches at a time, which helps to explain some of that tightness in the draw department.

Strength (0-20):  Medium to Full. For the most part I would agree with the assessment as it has some real power behind it. I felt like it deviated back and forth between strengths quite a bit, never really settling on one specific side.
Score: 18

Flavor (0-20): Breaking down this stick is tough, since there is a lot going on in it. The most prevalent flavors are cedar, leather, and cocoa with a lot of pepper on the retrohale. The main flavors are sustained throughout the entire smoke, just with varying degrees of strength. In addition to this, there are some wonderful undertones of nuts, coffee, and earth. Again they seem to intermingle at varying points, though none stayed around for long. I would tag this as being moderately complex, but it still has the simple backdrop that should please most cigar smokers.
Score: 18

Value (0-20): The pricing feels pretty good in comparison to other Man O’ War lines (and other things in the industry). Though it isnt an absolute bargain either. If purchased in a 5 pack or box, it drops to as low as $6.75 a stick... which would be a better bargain.
Score: 17 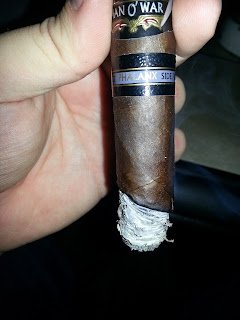 Overall (0-100):  Looking back at some of the other Man O’ War cigars that we have smoked and reviewed, this one sits in the 4th slot out of 5. But that doesn’t mean this is a dog of a cigar by any means… it simply means that we found the others to be just a hair better in different areas. It’s got some tremendous flavors of cedar, pepper, leather, and cocoa and wonderful undertones to match its strength. It did fall a slight bit short in the value and construction areas, but not by much. It’s a solid cigar with a lot of upside to it, and absolutely worth smoking at least once.
Score: 88