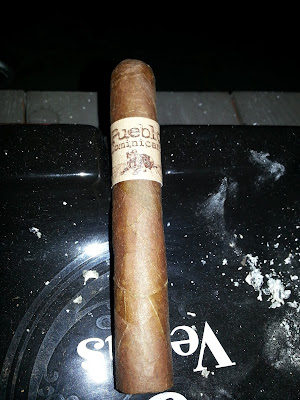 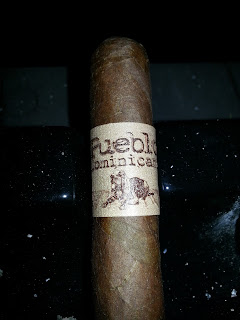 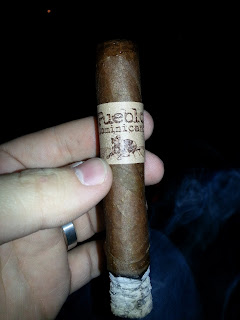 Appearance (0-20): The Pueblo comes with a nice, slightly oily wrapper and a simple tan and brown band. The band nearly melds into the cigar with how seamlessly it matches. The wrapper also has a nice sheen to it, and I noticed a bit of plume beginning to form. Aside from there being some small veins that can be seen, there was nothing too troubling. It’s not one that may completely grab your eyes from afar, but it still is nice enough when you pick one up.
Score: 17

Construction (0-20): Speaking of picking this up, it has a nice firmness to the wrapper but it still squishy enough that you don’t feel like you are going to crack it from a slight squeeze. The cigar feels pretty well balanced, with no gaps of note. The initial snip revealed a bit of debris, though it wasn't an excessive amount. The draw was slightly tight, but opened up upon the initial puffs. The burn remained close to straight through the entire stick, with one small touch up, and the ash held for 2 inches in a clip.
Score: 17

Strength (0-20):  Being pushed as a full strength cigar, I would say it falls just short of being power packed from start to finish. Medium to full to begin, it quickly moves into the full range and never looks back. Very very close, but not spot on.
Score: 19

Flavor (0-20): Welcome to yet another AJ Fernandez blend. It shines in the flavor department, per the usual, with very interesting complexity. To start things off there’s an earthy flavor that is complimented by cedar and a rich creamy coffee.  The coffee begins to take a slightly bitter flavor on (in a good way) as it mixes with a sweet chocolate and deep tobacco flavoring. Once you hit the final third, I felt like it transitioned back to the original flavors with the cedar and earthiness taking precedence.
Score: 18

Value (0-20): The $7.00 price isn't terrible given some of the above ratings, though it’s close to the price of a lot of really solid smokes. Granted a box price would bring this down to $5.00, or alternately cigarbid where the price of a 5 pack goes for between $7 and $17.
Score: 17 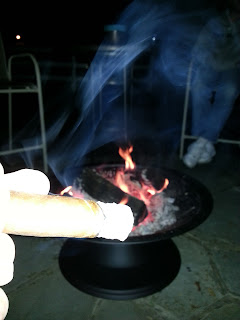 Additional Notes: Smoked outdoors at by the fire, paired with water.

Overall (0-100):  There are a lot of things to like about the Pueblo Dominicano in a robusto size. It’s packed with a hard hitting strength, has some wonderful flavors that meld well together (earth, cedar, coffee, chocolate), and the transitions between flavors are extremely seamless. It may not be the prettiest girl at the prom, but she has a natural beauty you can’t deny, and you feel if she got all dolled up she would be a knockout. Some small issues (a retouch here, slightly inflated price there) keep this from breaking the 90 point barrier, but it would easily top it at a couple of bucks less. AJ Fernandez put out a fantastic cigar that is worth giving a try. If nothing else, it’s a highly above average everyday sort of cigar.
Score: 88
Posted by Unknown at 1:52 PM