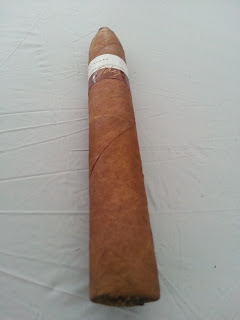 Appearance (0-20): Following the same model as his first release, Ramon Bueso’s label for the Odyssey looks much like his other offering, but uses brown and gold tones instead of the black that was used previously. In contrast to the original wrapper that the Genesis sports, this one is a Connecticut shade wrapper that is grown in Honduras. The wrapper has a very nice light shade to it with no major imperfections.
Score: 18 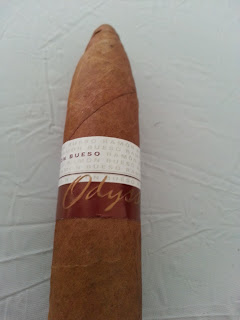 Construction (0-20): Quality still seems to reign here, as it is well packed from the initial pickup. The wrapper has some light give, but it feels like the tobacco within is perfectly spread throughout. The initial cut revealed very little debris, with a smooth easy draw. After lighting up, the draw remained consistent with just a little give. The burn was slightly off and the ash held up relatively well (1.5 inches at a time) but was a hair flakey. The ash itself was nearly a pure white.
Score: 17

Strength (0-20): Listed as a medium offering, I found this to be above that range slightly. It begins in the lower side of the medium range and nearly hits full status by the time its done.
Score: 17 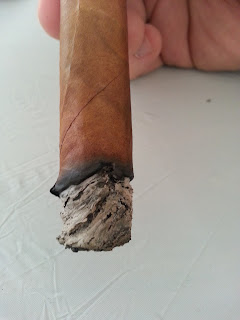 Flavor (0-20): Once the flame hits the tobacco you’ll find a nice hot red pepper spice. But don’t get completely set on it maintaining that spice level. Within moments, the pepper drops off almost completely and a rich roasted nut flavor is ushered in. Along with it comes some notes of cream that increase as the stick continues. In the background there are some woodsy flavors and a rich tobacco core to it. If you pay careful attention, you will also find a slight highlight of a natural mint that compliments this blend perfectly without going overboard.
Score: 19

Value (0-20): $7.50 is a solid pricepoint for this cigar. The flavor complexity alone is worth giving this one a try for the price. Though I would likely go for a bundle to drop the price.
Score: 18

Overall (0-100):  Let me start out by saying if you are looking for another version of the Genesis – plain and simple… you are going to be let down. But if you go in with an open mind you are going to find an extremely interesting and complex cigar that has really unique hints of mint hidden beneath the creamy and nutty base. Slight falters in construction (slight burn issues, flakey ash) and a difference in strength profile (billed as medium though it spans the entire scale) dropped this down a few points, but it’s still worth smoking even at the $7.50 price. Ramon Bueso has put out another solid cigar that may end up being a diamond in the rough as it ages.
Score: 89