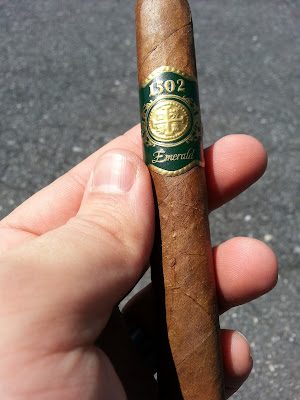 Appearance (0-20): The 1502 Emerald looks like a standard cigar you could pick up anywhere. The wrapper has some small imperfections to it, along with a few minor veins that are really nothing more than a footnote. Aside from that, there are no real visible imperfections that can be seen. Taking a closer look, there’s actually a nice amount of plume that is hanging out on here, so that’s a positive. The band is somewhat unremarkable, though there is something pleasing in the simplicity too of going with the gold and green color scheme.
Score: 17 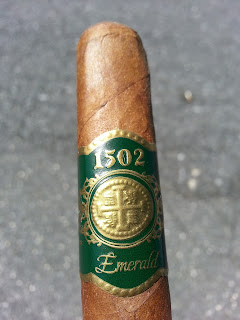 Construction (0-20): The strong wrapper has only a little give when picked up, but the tobacco within feels solidly packed. No other imperfections to note from the look and feel. Upon cutting, there was a lot of debris that dropped out, which gave me a little bit of a worry. After cleaning off the end and taking a few prelit puffs, I was satisfied that the draw had some nice resistance and wasn’t going to implode on me. After lighting up, the cigar held its own very well. The ash, a very nice greyish white color, held on for 2+ inches at a time and burned extremely coolly and evenly.
Score: 17

Strength (0-20): Mild to medium is the billing and it’s pretty spot on. I feel like the best description is one of being subtle, but having a little kick. It’s really well balanced and tempered.
Score: 19

Flavor (0-20): Where I am typically inclined to find a creamy taste from a cigar like this, the 1502 Emerald puts out a lot of coffee and earthy tones. There is a natural sweetness that mixes in (think something akin to honey) but there is also a dryness to it. On the backend there is also a bitterness that seems to work well at cooperating with the previously mentioned honey. As the first half passes, you will find some additional hints of wood, spice, and cocoa but they are mere specks here and there as opposed to being something that is prevalent.
Score: 18 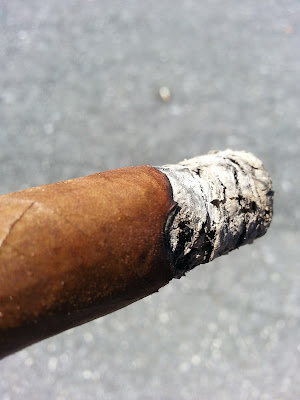 Value (0-20): Pitting this up against other similar cigars and it’s a bit of a bargain at $7.00. Few other smokes will match the flavor profile and delicate balance with the strength and complexity.
Score: 18

Additional Notes: Paired with water at Cigars International [CigarFest weekend, in the parking lot while tailgating].

Overall (0-100):  For a bit of a lighter smoke, the 1502 Emerald actually stands out quite well. The flavor profile is moderately complex and is really pleasing to the palate, while still holding to a mild to medium strength… which is not a simple feat. Yet there is still enough of a kick to it that you can feel the cigar when you’re done. Small issues with the crafting may exist, but it’s the type of thing that can be mainly overlooked given some of the other positive attributes that the Emerald has.
Score: 89
Posted by Unknown at 7:30 AM

Email ThisBlogThis!Share to TwitterShare to FacebookShare to Pinterest
Labels: 1502, 80-89