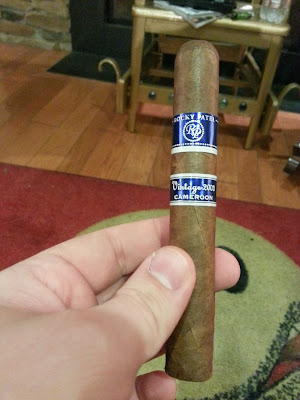 Appearance (0-20):  The shiny navy and white dual bands give this cigar a nice initial look to cover a decent looking stick. Coloration of the tobacco is consistent with some minor imperfections. There are some smaller veins of note, though nothing that would be a cause for too much concern. It’s not a cigar I would be implicitly drawn to, though I wouldn’t walk away from it either.
Score: 17

Construction (0-20): A lot of people tend to swear by RP and his standards for cigar manufacturing, but I find that it doesn’t always implicitly hold true. This stick is an example of that. The initial cut was a bit messy, and the draw was very loose. While it burned cool, it was rather flakey and inconsistent in terms of keeping a decent line. The ash, however, did hold on for over an inch at a pop. It was really quite disappointing, as through three different sticks, I had the same issues with each of them.
Score: 12 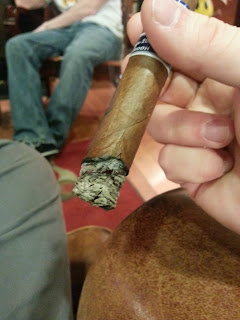 Strength (0-20): Medium to full billing it stands up to that relatively well. No real complaints here.
Score: 18 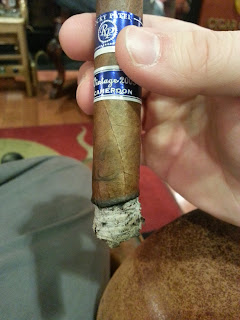 Flavor (0-20): Initially there is a sweet caramel and rich leather taste to introduce you to the smoke. It’s really well balanced and there are nuances of spice, earthiness, and cedar. The blend remains relatively unchanged with the exception of the earthiness, which begins to ramp up slowly and finally peaks around the 2/3 point of the cigar. From time to time there are hints of pepper, but nothing overpowering in any way.
Score: 16

Value (0-20): $8. Hmm. not quite the price I want to pay for something like this. I felt like it should hover closer to the $5 range, and even there might be a bit of a stretch. It’s not out of this world for the pricing, but it also isn’t great.
Score: 13

Overall (0-100):  I know a lot of people who will swear by Rocky Patel, but I personally have found the majority of his smokes to be on the boring side of things. There are some asides, of course, but this one is no exception. There are some decent flavors held in the Vintage 2003 Cameroon (caramel, earth, leather, cedar) but they more or less are the same throughout. Aka no real complexity. It’s still pleasing to the palate and has its place… just not when I’m looking for something with more flavor. There’s some nice strength behind it but with both an alright appearance and some construction issues… I would likely steer clear for its retail price.