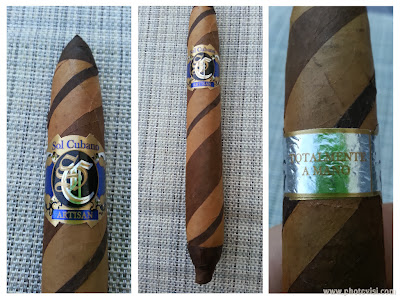 Appearance (0-20):  There is no denying that the Sol Cubano Artisan looks really cool.  The uniquely twisted wrapper makes it look like a barber pole with its design, showing some real attention to detail. The band it bold enough to proclaim its name and on the back it states “totalmente a mano” – aka totally made by hand. There were no visible issues at all. I’ll note, I received this via a trade with someone, but I have been tempted to pick it up before. The major thing that held me back was the $15 price, as I didn't want to pay for what could be an expensive “gimmick”.
Score: 19 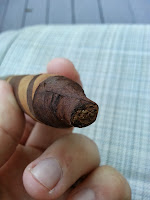 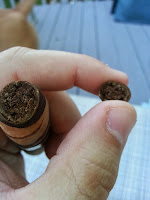 Construction (0-20): This stick was a bit flexible and felt really well made. No obvious gaps. I cut it and… no debris. This one was very well wrapped. The end lit up well and the first buffs were nearly the perfect draw. The ash held on for a little less than I would have preferred, however, overall one
to two inches at a time isn’t bad either. For the most part, it was a light gray ash.

Strength (0-20): Where the information on this bad boy points to it being a medium strength cigar, I felt it actually began in the lower medium scale and at times scaled into the full range slightly. It’s quite broad given the smoke.
Score: 16 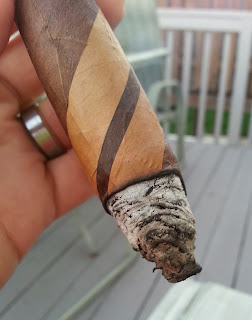 Flavor (0-20): Lighting this opens up with earthy flavors and a nice light toast. Its really mild and understated until you are almost an inch in, where the earthiness picks more fully. Enter additional tobacco and cedar flavors along with some chocolatey hints. Moving beyond, it becomes creamier and eventually picks up some light spice. In the final third it remains both creamy and a little nutty but is enhanced further by a little pepper. It’s not utterly complex overall, but it’s got a decent fusing of elements and its certainly not bland.
Score: 16

Value (0-20): $15 = absurd. Be honest here folks, for a stick like this you hope to pay nothing more than $6 or so. And at that price it would be worth it. But the pricepoint is absolutely way too high, even for a limited stock cigar like this.
Score: 13

Additional Notes: Paired with water on the deck.

Overall (0-100):  I’m pretty glad I was able to give this one a whirl, as I don’t think I would have picked it up via the MSRP (which I find to be overkill). I've spoken to a few people about this one in particular and it’s been seen on cbid at times for anywhere from $3-$8. At that price range it’s a lot easier to handle. But, as noted, it really isn't just a gimmick of a cigar as its well wrapped, packed, etc. The flavor profile is certainly there and it fuses very well, though the complexity isn't top notch. For a medium smoke it delivers, but it’s a little all over that range at the same time. I wouldn't recommend picking one of these up at full price, but if you can snag one cheap its worth trying once.
Score: 83