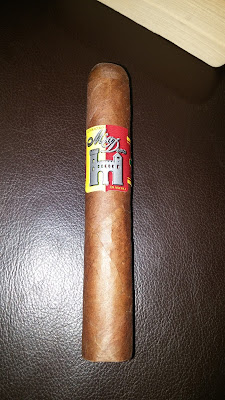 Background:  Gary Griffith and Emilio Cigars have been hitting some real home runs with their ever increasing menu of cigars they are distributing. To name a few that we have tried – the Ezra Zion Reagan Honor Series, Ezra Zion Inception, Emilio AF2, and the 1502 Emerald Toro. There are many other cigars and lines that the House of Emilio represents that we haven’t tried just yet, such as the Epicurean, Guayacan, Bodega, and Nomad Cigar Company offerings and the cigar in today’s review – the Mia Dora. After some quick research, I was able to pinpoint that the smoke was produced by one of my favorite names in the industry – AJ Fernandez. Gray Griffith, who provided us with the cigar for the review, had this cigar produced as homage to both the woman he loves and the town that her family is originally from (Ascoli Piceno).

Appearance (0-20):  Being honest the label didn’t impress me at all. The brighter red and yellow work well to draw your eye in and is complimented well by the silver. The problem is there is a white shadow behind everything that actually detracts from a potentially solid look. It becomes almost blurry and looks cheaply made. Take away the band and you have a nice looking cigar beneath. No obtrusive veins, a tight wrap, and nice coloration with no blemishes. The foot shows off a nice mixture of tobaccos.
Score: 14 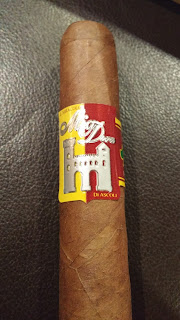 Construction (0-20): Initial feel to this one is downright soft and silky. It’s actually very well packed. Feeling throughout the stick I couldn’t find any areas that I would be concerned with. No debris on the cut at all, very nice airflow, and an ash that held for a number of inches at a time. No touch ups were necessary or relights and the ash line was almost razor sharp. Where it lacks in appearance, the construction is completely spot on.
Score: 20

Strength (0-20): Touted as medium, the Mia Dora tends to be a little more power packed at times than the medium range, but for the most part sits right in that range.
Score: 17

Flavor (0-20): It doesn’t take much time after lighting up the cigar to taste a straight up black pepper spice that seems to get spicier during the first third. It’s lightly tempered by some nice earthy / woodsy tones and a little bit of sweetness. The spice continues to be most prominent on the retrohale, but really does balance well with a creamy caramel sort of flavor that makes itself known in the second third. By the final third there is quite a bit less from the outright spice perspective and a nuttier flavor with a little spice kick. It’s really earthy, almost like a toasted nutmeg. The transitions between major flavors are seamless, and there are a number of complimentary background flavors that meld in and out throughout but aren’t quite as prominent but are certainly noticeable – such as chocolate and cedar. It’s really a superb blend.
Score: 19

Value (0-20): This might be one of the toughest items to rate on a value standpoint. Looking strictly at the cigar’s packaging – and I would never have picked it up. But the stick is absurdly good and well-constructed, and would easily beat out a number of other sticks in the $8.00 - $9.00 price range.
Score: 18 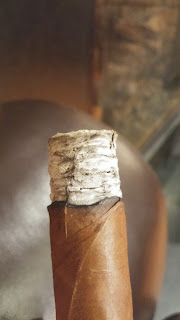 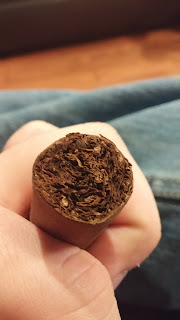 Overall (0-100):  This is another cigar that I wanted so badly to be able to rate a little bit higher but it’s held back by one category – namely the appearance. The band just kills the rating because let’s be honest – the first thing that you see when looking at cigars is the packaging. Chances are if the packing is mediocre or less, you aren’t picking up that cigar. The Mia Dora isn’t completely horrendous since the cigar itself looks good, but I would have easily passed it over due to the band. Now for the good – it’s expertly constructed, nearly perfectly blended, in a good price range given the complexity, and is pretty solid when it comes to the strength. The flavor profile is spicy but is mellowed and balanced well with both earthiness and sweetness to ensure it never becomes overwhelming. Honestly this is a really good cigar, minus the packaging. If Emilio can get that portion right, this would be a knockout hands down.

Email ThisBlogThis!Share to TwitterShare to FacebookShare to Pinterest
Labels: 80-89, Emilio 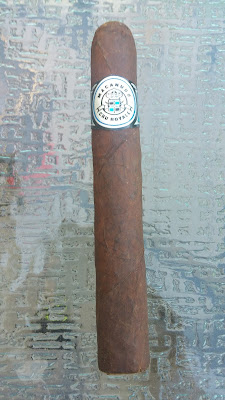 Background:  Macanudo has been a staple in the cigar industry for over 40 years. Consistency took them through the cigar boom of the 90s where a number of other companies sacrificed quality in order to pump out a ton of cigars. But consistency does not always equate to the bold risks that some cigar lines have to take to stay relevant. Has Macanudo been able to reinvent itself to keep from being passed by completely? I believe it has begun that process, and the Cru Royale is one of the flagships of that change. 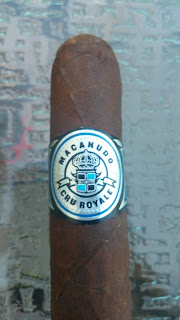 Appearance (0-20):  One of the first things a company has to do in order to reinvent itself is to change its image. The blue and silver band set against a nice dark wrapper is a step in the right direction as it diverts from the typical plain nature that Macanudo puts out there. In fact it’s enough that I would personally select the Cru Royale above many other cigars, from an aesthetic standpoint alone. Looking across the length of the stick there are no real blemishes of note, save for a small imperfection or two.
Score: 18

Construction (0-20): The wrapper was very silky to the touch with a little bit of an oily feel. Both the wrapper and the binder / filler is soft but relatively well packed. Mid-stick there was a pocket of tobacco that felt a bit under stuffed. A small amount of debris was resident upon cutting, but not an excessive amount. The burn was a little uneven, which is a shame since the ash held for a decent clip. Despite some of the minor issues, the draw was perfect throughout.
Score: 16

Strength (0-20): This one sticks nearly right down the middle in terms of strength, meeting the medium spectrum that it’s billed at.
Score: 20 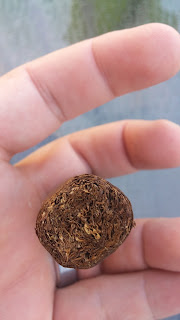 Flavor (0-20): Initially, you are greeted by a nice spicy kick that quickly levels off and melds in with a creaminess. It doesn’t take too much time before there is a nice sweet, rich tobacco flavor that intertwines with creamy nature and almost completely eradicates the spice. In the second third of the cigar it settles in to a nutty / earthy kind of flavor, which picks up in intensity through the rest of the stick. There are small variations that come in and out (a dash of cocoa, some bitter coffee, etc) but nothing lasting.
Score: 16

Additional Notes: Paired with water on my deck. The cigars were provided by Famous Smoke Shop.

Overall (0-100):  Let me preempt the summary here by saying that overall there are very few Macanudo cigars that I truly enjoy. I have always found Macanudo to be a more or less boring brand. Aka it’s a decent middle of the road kind of cigar that is hard to hate but equally hard to love. With all that being said, there is a lot about the cigar that didn’t wow me – the complexity is somewhat mediocre, the construction left me wanting something a little more, and the value isn’t quite at the point where I would consider it a must buy. But I won’t write this one as off completely. It hits directly in the medium realm, exactly as it’s billed. And the flavor combinations are harmonious and consistent throughout. Couple the flavors with the strides they made in rebranding and the Cru Royale spells a step in the right direction for Macanudo if they want to continue to thrive in an ever changing cigar market.
Score: 86 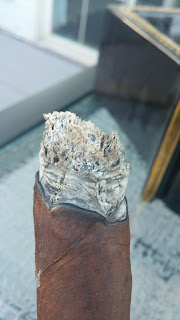