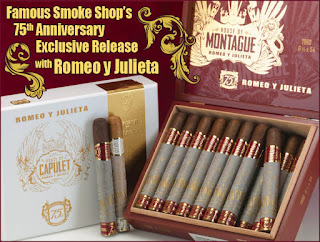 Easton, PA – With over 75 years of serving the industry, Famous Smoke Shop has been a leading online distributor of discounted premium cigars, with its humble roots tracing back to a small shop in New York City. The company specializes in offering the web’s widest selection of cigars at the lowest prices. It is with great excitement that Famous has just announced the release of two exclusive limited edition special-sized cigars to help celebrate Famous Smoke Shop’s 75th anniversary, both of which are line extensions of the widely popular Romeo y Julieta Capulet and Montague lines.   Offered in a rarely seen 6 1/2 x 54 vitola, the first shipment has just arrived at the company’s warehouse and is currently available for sale on their website. The company has expressed that the new brand will be available in limited quantities, but is not a one-time release and will be a consistent offering for the foreseeable future. 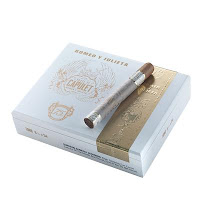 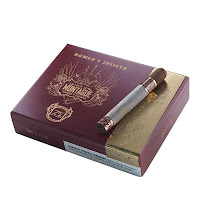 The Romeo y Julieta Capulet 75th Anniversary features Honduran and Nicaraguan longfillers, and a Nicaraguan binder, all wrapped in a massively flavorful Ecuadorian Connecticut wrapper for a smoke that’s easy and smooth, yet loaded with enticing flavors. The Romeo y Julieta Montague 75th Anniversary is a bolder blend than its sister cigar with a hearty blend of Nicaraguan, Dominican, and creamy Brazilian longfillers, a Dominican Olor binder, and a Brazilian Maduro wrapper. The result is an astoundingly rich and complex cigar from start to finish.

“75 years is a major achievement for any company,” Cigar Advisor reviewer and Famous Smoke Shop copywriter Jonathan Detore remarked. “But to remain family owned throughout all those years makes this occasion that much more special. And what better cigar to celebrate with than the Montague or Capulet? Both have been stellar lines since their release, and this limited edition size will only offer more of that impeccable core flavor to the mix. I was especially excited to try out the Montague because of the Brazilian longfiller which was outstanding, but the Capulet was a rock star in my taste tests as well. Very well done by the men and women at Romeo y Julieta, and a big thank you for commemorating our anniversary with this specialty cigar.” 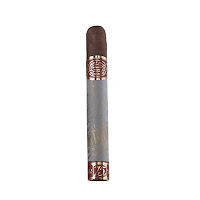 Both Romeo y Julieta Capulet and Montague 75th Anniversary cigars will be offered in a special 6 1/2 x 54 Double Toro. With Famous’ special full box pricing, customers can enjoy this new offering with individual retail prices which range from $5.85 to $6.40 per cigar respectively, with production being limited to 1,000 boxes in the Capulet blend, and only 500 boxes in the Montague blend. People interested in learning more about Romeo y Julieta cigars or Famous Smoke Shop should visit www.Famous-Smoke.com or call 800-564-2486. 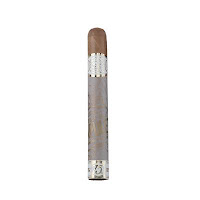