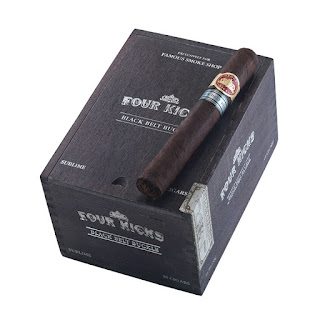 EASTON, PA – Famous Smoke Shop, a leading online distributor of discounted premium cigars, specializing in offering the web’s widest selection of cigars at the lowest prices, has released the two remaining vitolas in their exclusive Four Kicks Black Belt Buckle selection by Crowned Heads Cigars. Named "Sublime" and "Robusto," the new sizes join the Black Belt Buckle Corona Gorda, which was released in November of 2015, and will be limited to only 500 boxes each.
Four Kicks Black Belt Buckle cigars are made using the same Nicaraguan long-filler and binder tobaccos used in the original "91-rated" Four Kicks blend, except the wrapper is a toothy, ebony-hued Connecticut Broadleaf wrapper which adds a note of sweetness to the flavor profile. The blend is medium-bodied and well-balanced as notes of honey, chocolate, hints of light peppery spice, and cedar combine for an intriguingly complex smoke. 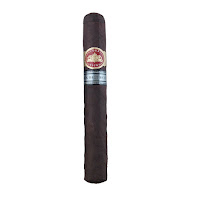 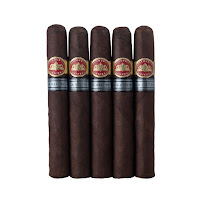 “We’re excited to bring Black Belt Buckle into a regular production brand for Famous Smoke," said Jon Huber, Crowned Heads Cigars co-founder. "It’s always been a dream of mine to work with Ernesto [Perez-Carrillo] on a project that involved a [Connecticut] Broadleaf wrapper, as I think he’s one of the best in the business at working with that particular wrapper leaf. And to be able to create this blend for our friends at Famous is a bonus.”
The Four Kicks Black Belt Buckle selection will now be presented as follows in boxes of 20 cigars:
Sublime (6" x 54 Toro) @$8.95 msrp
Robusto (5" x 50) @$8.45 msrp
Corona Gorda (5 5/8" x 46) @$7.95 msrp
"The success of the Corona Gorda has definitely proven that Jon and Ernesto were on to something," said Jim Charnley, Famous Smoke Shop Sr. Project manager. "I see the Black Belt Buckle Sublime and Robusto taking the brand to the next level of consumer awareness and expect sales to be even higher, now that cigar smokers will have all three sizes available to them."