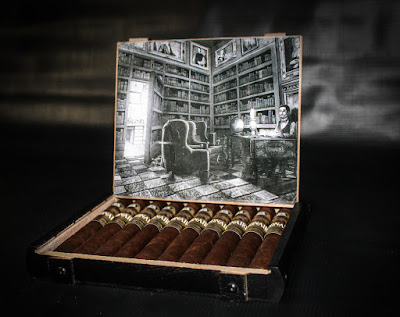 Santiago, Dominican Republic – Debonaire House announced today the release of the Limited Production Debonaire Cornus in Habano and Maduro blends. The cigars will be displayed in Drew Estate’s booth (Booth #2403) at the IPCPR Convention and Tradeshow held July 24-28, 2016 in Las Vegas, Nevada.

When asked about the limited edition, Founder of Debonaire House, Phil Zanghi III noted “Our products are the culmination of 20 years of personal research in Tobacco Alchemy. The Ultra Premium Debonaire Brand spares no expense to deliver a one-of-a-kind smoke that at its heart purveys the Debonaire Ideal. If you have come to love the Debonaire brand you are surely going to enjoy this limited edition size.”

Fans of Debonaire Ultra Premium Cigars are encouraged to download Drew Diplomat the official mobile application of Debonaire House which is now available in the App Store for iPhone®, and iPod Touch® and on Google Play™ for Android™. For more information head to http://drewdiplomat.com

Debonaire Ultra Premium Cigars were intimately developed out of the passion to experience the perfect cigar at the hand of Philip S. Zanghi III, founder of Indian Tobacco® Cigar Company and Daniel Sinclair founder of Durfort Holdings® in USA. We incorporate the finest, darkest, air cured tobacco from the most superior tobacco crops of Central America and Dominican Republic. Our gourmet tobacco is blended to perfection with the highest attention to detail so that the rich history of the past can be savored in the present. Debonaire® Ultra Premium Cigars are exclusively available to reputable trusted tobacco merchants preserving the brand for many years to come.

Founded in New York City in 1996, Drew Estate has become one of the fastest growing tobacco companies in the world. Under their mantra “The Rebirth of Cigars”TM, Drew Estate has led the “Boutique Cigar” movement by innovating new elements to the tobacco industry with their unique tobaccos and blending styles that have attracted new and traditional cigar enthusiasts. In their Gran Fabrica Drew Estate, the Nicaraguan headquarters, Drew Estate produces a variety of brands such as ACID, Herrera Estelí, Herrera Estelí Norteño, Kentucky Fired Cured, Liga Privada, MUWAT, Natural by Drew Estate, Nica Rustica, Nirvana, Pappy Van Winkle Barrel Fermented Cigars, Tabak Especial, Undercrown, and Java by Drew Estate.
Posted by Unknown at 8:39 PM