The event was highlighted by the global launch of the Limited Chefs Edition, a special cigar line, created exclusively by six international chefs. The Chefs Edition will be available again in the United States in limited quantities beginning in April 2017.

“The Davidoff Chefs Edition offers fine dining and an exceptional cigar for connoisseurs to enjoy after a culinary tour de force. This unique partnership with some of the world's greatest chefs has inspired Davidoff master blenders to blend this truly memorable cigar,” explained Charles Awad, Senior Vice President of Global Marketing & Innovation at Oettinger Davidoff AG.

“When I first met with my colleagues and the Davidoff team to discuss the blend of Davidoff’s first Chefs Edition, it was important to me that every connoisseur would have fun with the fine cigar. As a chef, my key aim is to deliver new delights and to make people happy, and that’s why I love my job and the Davidoff Chefs Edition project,” said the famed Swiss chef, Peter Knogl, from the Cheval Blanc of Grand Hotel Les Trois Rois in Basel/Switzerland.

Apart from Peter Knogl, the chefs who applied their refined palates in influencing this unique cigar were Renato Wüst of Bad Ragaz Grand Resort in Switzerland, TV Chef Ali Güngörmüs, of Le Canard HH Pageou, Münich in Germany, TV Chef Léa Linster of Restaurant Léa Linster in Luxembourg, Michel Trama of Relais & Chateau, Puymirol in France and Maria Marte of Club Allard, Madrid in Spain. Between them the six chefs boast nine Michelin stars and the two Swiss chefs, Knogl and Wüst have 19 and 15 GaultMillau points respectively Wüst also bears the honour of being GaultMillau CigarMan of the Year 2016.

The Davidoff Chefs Edition is the equivalent to a culinary masterpiece. Just like the perfect meal, it begins gently with complex layers of subtle flavors and builds up to a sublime and unforgettable crescendo. The wrapper is oily and smooth and everything about it, from its flawless composition to its elegant color, whets the appetite for the cigar’s initial aromas, both nutty and sweet. The flavors become richer and more uplifting in the second third, with hints of citrus, bloomy fruit, sweet corn and a refined aftertaste that is both oily and creamy. In the last third, the cigar’s beauty and vitality erupt into an intense, peppery yet meltingly sweet and gratifying Grand Finale, just as a gastronomic experience is crowned by a superb dessert.

To complement its robust and complex elegance, the Davidoff Chefs Edition pairs perfectly with an aged Cognac, Amarone, or Sauternes.

Launch and availability
3,000 boxes will be available in the United States beginning in April 2017.
Posted by Unknown at 1:17 PM 0 comments


March 24, 2017 - It is with great sadness that we share the news that our beloved friend, cigar legend and talented music composer, Avo Uvezian, has peacefully passed away earlier today. This sad news comes almost immediately after celebrating his 91st Birthday this past Wednesday, March 22nd.

We recognize that Avo’s passing is a tremendous loss to our industry – he was enormously appreciated by all who had the pleasure to come into contact with him – consumers, retailers, manufacturers and acquaintances. Hans-Kristian Hoejsgaard, CEO of Oettinger Davidoff, commented “Avo has been a huge personality across the globe and was part of the Davidoff family for over 30 years and we will sorely miss his passion, his personality and his wonderful talents as a cigar man and as a music man.” Jim Young, President Davidoff North America adds “Avo was incredibly energized by his engagement with the business and was constantly bringing new ideas to think about. An evening with Avo was always an unforgettable evening of great conversation, laughter and warmth. We shall miss him deeply.” Scott Kolesaire, who manages the marketing program for Avo and knows him extremely well, added: “up until the end, the daily phone calls and free-flowing ideas were part of our everyday conversations. Avo was my friend, a life mentor, and a person unlike any other. I will miss him dearly.”

On behalf of all of Oettinger Davidoff and Avo’s friends across the premium cigar industry, we extend our sincere condolences to Avo’s family – his wife Nivia, daughter Karyn, sons Jeffrey, Robert and Ronny and their families. 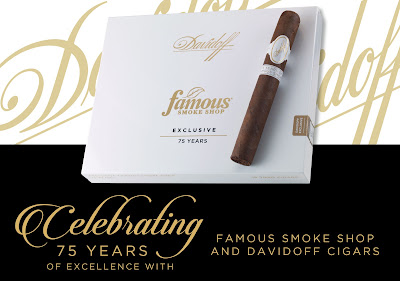 EASTON, PA – Famous Smoke Shop, the leading online distributor of discounted premium cigars, specializing in offering the web’s widest selection of cigars at the lowest prices has just announced the arrival of the Davidoff Famous 75th Anniversary cigar. Blended exclusively for Famous Smoke Shop, this limited edition cigar, of which only 500 boxes were produced, is offered in one size, a 6" x 50 Toro format with a secondary band that reads: "75 Years of Famous Smoke Shop," and is sure to become a collector's item.
The Davidoff Famous 75th Anniversary cigar is one of several special editions made for Famous Smoke Shop by some of the world's leading cigar manufacturers to honor the retailer's 75th year in business, including Romeo y Julieta, and Padrón cigars, with more in the works.

"Everything about this cigar is special," said Jim Charnley, Famous Smoke Shop's Director of Purchasing & Merchandising. "Davidoff and Famous have always stood for offering cigar smokers the very best in quality and selection, and being a Davidoff Appointed Merchant, we're proud to have a limited edition Davidoff cigar we can now call our own."

The cigar offers a full-flavored blend of specially-aged long-fillers from the Dominican Republic and Nicaragua embraced by a Mexican San Andrés Negro binder, and finished in a flawless, dark-natural Habano wrapper grown in Ecuador. The smoke, itself, issues notes of earthy berries, cocoa, cedar, and spice on a long and luxuriously creamy finish. 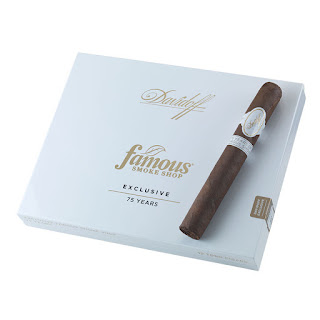 "Smooth, with a mellow bite – right in my wheelhouse," said John Pullo, Managing Editor for CigarAdvisor.com. "The chance to sit and enjoy a smoke like this Davidoff comes along once in a lifetime – glad this 75th Anniversary happened during mine." 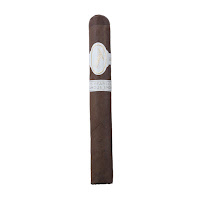