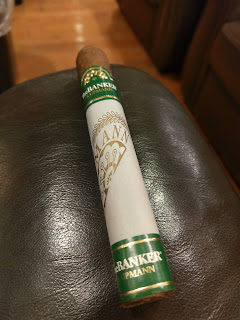 Background: There are so many cigars out there and sometimes it really does take years before we have the opportunity to try things. This one falls under that category. I picked this one up as a side deal from Holt's and obviously its stood the test of time over the past 3 years since they are still available. Released in 2014, this is an homage to the originator of the H. Upmann brand, who was a German banker that traveled to Cuba to create his own blend for friends and colleagues. 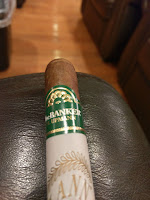 Appearance (0-20):  The presentation of this stick screams "banker" but in the most subtle way possible. The green bands with gold embossing, the white wrapping along the stick, etc... its all very much tied together. So kudos to the designers on that one. The stick itself looks pretty clean and clear of blemishes or major veins. Only some minor ones to note, and even those are likely to be nothing more than a minor footnote. Get it, foot... note? Like a banknote? Alright, I'll keep the jokes to a minimum.
Score: 18

Construction (0-20): I just said I would refrain from making too many more jokes, so.... lets just say I had one or two about the cost of a good construction but I am choosing not to put them here. Due to that I will just be straightforward - there is nothing big to scoff at on this, but there are some minor things to note. It has a firm feel for the most part but there are one or two areas that seem to have some small gaps.The initial cut only showed a small amount of debris. The draw is perfect from a prelight perspective, and it maintained that same pull throughout the stick (despite the few minor softer points). The ash held for multiple inches at a time, with a nice clean burn.
Score: 17 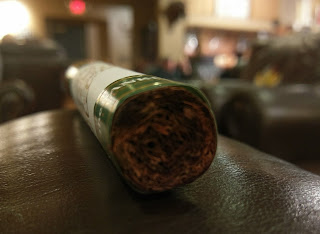 Strength (0-20): While this one is billed at medium, I personally believe this one tended to teeter toward the medium to full side of things. Still, its within the general ballpark of where it should be.
Score: 17

Flavor (0-20): There is an initial pepper blast to the Banker that hit like a Mack truck. Thankfully its blended in with chocolate and some delicious tobacco flavors. All of the flavors compliment one another, but the pepper itself fades back pretty quickly to become more of a background flavor. As it does fade, it is replaced by some of what you may refer to as baker's spices (things like nutmeg, cinnamon, etc). For the most part, the flavors stick exactly like that throughout, just varying in their degrees of intensity. Other minor flavors do mingle in, like leather and some woodsy undertones, but they are minor in the vast scheme of things.
Score: 17

Value (0-20): The value proposition is a tough one when it pertains to this particular smoke. At almost $8.50 per, its kind of in a tough range. There are a lot of really superb cigars that fit there. This doesn't quite differentiate itself enough...
Score: 16 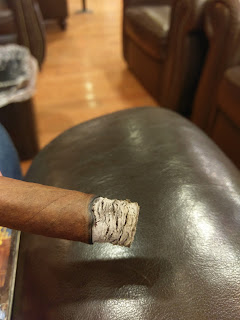 Overall (0-100): H. Upmann put together a really solid stick here. The first thing that jumps out at you when picking this up is of course the appearance. The color selections, the embossing, etc - it all screams money. But is it worth the cost of $8.50 per stick? For me, the answer is yes but with one caveat - I don't think this one really stands out among other competition around the same dollar value. Granted, it has some really nice flavors going on - chocolate, pepper, tobacco, and a number of small nuances. With the care put into making this one, the strength being nearly where it needs to be, and the flavor being great - I would say its something to pick up a single stick, or perhaps try to snag this as part of a deal. But if you're looking for a value stick, continue looking.
Score: 85